This OC character was made to accompany a fan-species dragon called the Thorn Devil, created by shataikislayer, on the SOD Forum topic "Thorn Devils - Fan Species Adoptables".

The two sisters rowed up the small river - a large stream really - on Thorny Island. It was so named because it was made of spiky rocks, was covered with prickly plants and trees, and home to toothy dragons, especially the Thorn Devil. They needed to refill the large barrels on their boat with fresh water, to restock their fishing ship. Their crew mates were anchored just off-shore.

Fjara Thorstabitur, the older sister, was hefty and solid. She was a solid rock in stormy weather, and very practical. The younger sister, Beita Thorstabitur, was comparatively skinny and wiry, but very nimble. She was smart but a tad more excitable, and empathetic, but not enough to weigh her down. They were fisherwomen, same as their parents and other siblings, same as their parents before them, and so on. Fortunately for them, Berk was rather egalitarian when it came to women's roles, nor did they keep slaves as many Vikings did.

The sisters rowed on, making sure they cleared any brackish water before filling the barrels. The river was quiet and its shores were covered with dense briars from plants like blackberries and dewberries. Unfortunately they weren't in season quite yet, or they would brave the thorns to stock up on the delicious fruit. There might be the flightless Thorn Devil lurking there too, watching. While other dragons came and went from the island, Thorn Devils stayed year round and acted as guardians. The sisters had little fear of the prickly dragons - if you didn't bother them, they didn't bother you.

"Do you smell that?" Beita asked, interrupting the silence.

Fjara nodded. "And do you hear that?" she asked back.

Beita listened. There were some sounds of birds from another part of the island, but not much else. No much in the way of dragon sounds. "Aren't there supposed to be a lot of dragons about? Come to think of it, I only noticed one or two flying overhead." An uneasy feeling started to form in the pit of her stomach. She started glancing all about, as did her sister. To their right, there was a tunnel of broken trees and limbs, as if a tornado had blown through. Here and there, were charred area, and they became more frequent as they moved further upstream. Beita wrinkled her nose. Odorous wafts of burned wood and decay floated past. "Perhaps we should find elsewhere to get fresh water," she suggested.

"Nah, we already waited too long, so we might not make it to another island. Best to see what is going on, and make sure it has nothing to do with the water," Fjara said. Of course that was the practical thing to do. Beita doubted the water was tainted, but one couldn't be too sure.

They rounded a bend in the little river and saw the source of the eerie quiet. There was what appeared to be a camp at one time, on a cleared area of the shore. If the large broken cage discarded there was any indication, this had been a Dragon Hunter camp.

Beita sucked in her breath in shock. "Oh merciful Freya!" she exclaimed. They rowed to shore. The Hunters had left in a hurry. They must have been attacked by the resident dragons, and the dragons had mostly lost, but drove away the fowl humans. Crows were loitering about and cawed at them angrily. Flies drifted in clouds about the campsite. The air was heavy with rot. In the fight it seemed, the hunters had killed several dragons and left them, but not before harvesting skins and other parts from some. A number were Thorn Devils, their spikes yanked out probably to make more Dragon Root poisoned arrows.

The sisters got out of their skiff and looked about. There were no human remains. "Must've taken the dead with them," Fjara noted "At least they have the decency for that much."

Beita wasn't sure her already churning stomach could take the site of human corpses, too. But she spat angrily, "They deserved what they got."

The sisters poked about with fabric covering their noses, in order to glean any information they could to report back to Berk. Also, no sense letting useful things left behind go to waste. Beita though, kept looking at the sad carcasses. "Shouldn't we do something?" she asked.

Fjara shrugged, at a loss. "What can we do? We can't take them to the sea."

Beita thought for a moment. Perhaps they couldn't give the dragons a proper Viking burial at sea, but they were - for the most part anyway - creatures of fire. "Let's build them pyres and return them to the Earth," she murmured, suddenly getting tight in the throat. Fjara nodded.

One by one, they piled tinder and wood scrap from camp around the bodies, said a prayer to the Valkyries for safe journey, and lit them up. The bodies caught fire quickly, perhaps because dragons had flammable parts in them. Next was the body of a Thorn Devil caught under a heavy pile of chain and metal. They weren't very large dragons, perhaps the size of a fjord pony.

"Hate to say it, but the chain might be useful," Fjara huffed, as they heaved it off the poor dragon.

"Just ... eww," Beita muttered. Metal was a precious commodity though, and ought not to be wasted. The Thorn Devil beneath it had once been a brilliant yellow-green, but was now dull and lifeless, though he hardly had any flies on him. Beita grabbed some brush to lay about him, as Fjara dragged away the chain.

Beita blinked and stared at the body. Had it moved? There were many reasons for a dead body to twitch or skin to roll or bloat - none in the least bit pleasant. No, there it was again.

Beita's cry of astonishment had Fjara quickly running to her side. "This one's alive!" Ever so slowly, the dragon's chest rose up, then back down. "Oh the poor creature! He's probably been here for days and not able to get to food or water!" 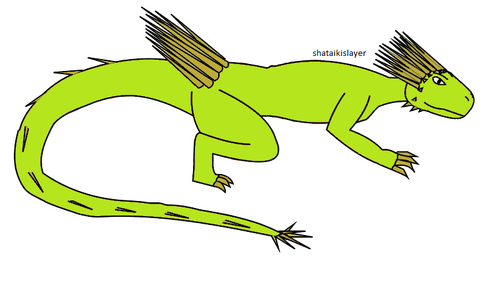 "Wait, what are you doing?" Fjara asked as Beita pried open the dragon's jaw and tried to poor some water in his mouth from her water skin. "Oi, Beita, he's near death. There's not much we can do. We should put him out of his misery."

"Well? Are you going to do it, then? Beita countered, looking pointedly at the dagger on Fjara's hip.

"What? Well yes, he's suffering ... Well, no ... no I can't," she sighed. Fjara had dispatched countless numbers of fish and other sea creatures in her life, but somehow this just didn't seem fair, even if logically it would end the beast's suffering quickly.

"At least we can try, right? He's probably too far gone, but at least he'll know some kindness at the end, and maybe a proper warrior's burial," Beita explained, as much to herself as to Fjara.

"Wait, you want to take him back to the ship don't you? You know that's not a good idea, right?" But Fjara had learned early on it was pointless to argue with Beita once her mind was set, just as she herself was bull-headed, too. Actually, stubbornness ran in the family.

So Fjara held open the dragon's maw while Beita gently poured small amounts of water down his gullet. To her delight the dragon actually swallowed. He moved just enough to roll into a ball. Beita grabbed a discarded bucket and poured some water over him to shoo away the flies and to wet his parched skin. "You'll be alright, whether here or in Valhalla, little warrior dragon," Beita murmured.

"We best get going. The crew will be wondering why there's smoke," Fjara urged gently, placing a comforting hand on Beita's shoulder.

The two sisters heaved the dragon onto their little craft, and some buckets, the chain, and other scavenged odds and ends. They strained to row just a little further up river, and filled the barrels to their brims with cool, fresh water. Beita gave the dragon a little more water, which he swallowed a little more easily this time. He kept his eyes closed and stayed motionless. But Beita still saw a tiny flicker of fight in him. She stroked him on his eye ridges and he parted his mouth ever so slightly as if to make a sound. "Not to worry, Hvasseggr," she cooed.

"Ahh, Beita, I hope for your sake he lives," Fjara uttered. It seemed her sister had already named him.

"Everything will be fine," Beita said simply.

With the boat weighed down nearly to the railing, they floated downstream to their ship.

When he heals, he is very active. He ends up enjoying ship life alright, but longs to run along solid ground. He protects Beita, and her sister too, without question, as well as their ship. He will face down sea dragons much larger. He's not terribly social with other dragons and humans otherwise, except Beita. Quiet and stand-offish. If he detects the presence of dragon hunters, though, he gets violent like a berserkr Viking, and may injure friend and foe indiscriminately.

How you met them:

Beita is a Norse word for "fish bait", and Fjara is a Norse word for "beach". I was looking for words relating to the sea. There weren't alot that sounded feminine to an English ear, or weren't specific ship terms. The last name - Thorstabittur - is an actual sort of surname or identifying name from an excerpt of the Eyrbyggja Saga (I have not actually read this!). The person is called Þórsteinn þorskabítur. The second name translates to "Cod-biter". The Norse letter "þ" translates as the sound "Th" in English.

About the Thorn Devil:

The Thorn Devils live on a solitary island, keeping the peace among the dragons there. They typically do not approach humans that wander onto the island, except to try and drive them away.