This OC Character was contrived to accompany a fan-species dragon called the Mistwhirl. The Mistwhirl was created by Zikta on the SOD Forum thread, "New Dragon - MISTWHIRL!"

Dragon Rider students clustered at the Berk Dragon Academy. Not only were there Berkians of age, but also Viking teenagers from other tribes. Berk's Chief had opened up the Academy to their interested allies, in hopes of spreading positive information about dragons and strengthening their political ties.

Berk and the original Dragon Riders were making many new allies, but at the same time, making many enemies. Enemies that might use dragons against them. So in the quiet conversations of Berk's Elder meetings, they realized Berk was now potentially a target, and they might need the help of those allies, strengthened with willing dragonkind.

Bera Brawnyboots crossed her arms across her chest, standing with her two teammates amongst the chattering students. She was part of the Outcast contingent of students, here to learn about dragons, how they could help their people, and hopefully a dragon useful to them.

In the center of the arena, Gobber the Belch stood consulting with Mulch, in front of a table laden with hay-packed crates. Senior Riders had been successful raiding a small camp readying for a dragon auction. The variety of eggs rescued were decided to be doled out to students. There weren't enough for everyone, so teams without any dragons took precedent.

Something hard thumped into Bera's shoulder, shoving her forward a step or two. "Oh, pardon me, Outcast," someone sneered at her, voice dripping with fake concern. She whipped around and scowled at the offender. "Oh I don't want to scare you away. Or maybe it would be best if you left, now, in case you don't get an egg you want," Bulljorn Burlyboots suggested, lips twisting into a smile that bared his teeth.

Bera was not sure what kind of response Bulljorn was expecting, but his face contorted into palpable anger. "You're my problem, Brawnyboots!" he hissed quietly in her face. "You're a fake. You are a dishonor to Berk and my family."

Bera glared back fiercely into his hate-filled face. Her fingers twitched on her sword. She was an excellent swordswoman and could probably defeat this irritating boy. It would be a fight for honor. Her teammate, Droplaug, whispered in her ear. "You know we can take 'em, but you know you're better than him, too." Then she moved to one side of Bera and Snotra moved to the other.

Bulljorn's gaze flickered to the other girls.

Suddenly Bera relaxed. "So, cousin, neither of us are responsible for our family's choices in the past. We weren't even born. Its history. What the honorable thing to do is support your Chief, isn't it?"

"You're no blood of mine," Billjorn spat and shoved past her to the tables.

Bera sighed. Her mother had told her it might be hard here, but to keep her head up and stay proud. Long ago, when Alvin the Treacherous was exiled from Berk, many followed him into exile and established the Outcast Tribe. Among them were several of the Burlyboot family, placing a great stain on the Burlyboot's honor. The Outcast Burlyboots started a new life with Alvin as their chief, living the life of rough, risk-taking Vikings. One had suggested severing all ties with their former Berkian life and altered their last name. Bera was thus born a Brawnyboot and had always been a Brawnyboot. She was proud of her family. The old Burlyboots, however, were stuck in the past, it seemed.

"Oh, look! There's a few Zippleback eggs! And are those two Thunderdrums?" Snotra chattered enthusiastically, pointing at the eggs.

Bera and Droplaug exchanged glances. One of their tasks was to tame a dragon useful to the Outcasts. Outcast Island was a glum island of rock, with little vegetation other than the skeletal Loki Trees. "Useful" species meant gas dragons for their fertile feces, or perhaps a tidal class to help with fishing. "Un-useful" dragons would be more boulder class dragons, since the island was already riddled with Whispering Deaths and their tunnels, or those that were particularly deadly to any hard-won vegetation, like Timberjacks and Typhoomerangs.

Bulljorn stood in her way. At the tables were a few of the more experienced dragon rider students, like Bulljorn and Wilfred the Wacko. They were the ones who were going to hand out the eggs. Bera moved up front with the other dragon-less teams and awaited her turn.

"Berk Team 15!" Gobber bellowed, and a read-haired boy moved up front toward Bulljorn and Wilfred and the others. Each presenter had an egg and the boy looked at them, then chose a speckled one Wilfred had. He clutched the egg happily and showed it to his teammates.

Bera stepped proudly forward. She strode over to Wilfred, who held a light green colored egg with large golden spots on it; she was sure it was a Zippleback egg. Wilfred smiled and started to hold out the egg.

"Wait!" Bulljorn said loudly, and held out a sma round egg, that seemed to swirl with iridescent colors. Definitely not a Zippleback egg. Or a Thunderdrum. A Changewing perhaps. While Changewings were quite interesting, their general orneriness and acid-spitting would not be very helpful to her people and bettering their Island.

"This one is so mysterious and exotic," Bulljorn cooed, fake smile pasted on his face.

Bera frowned and opened up her mouth to refuse. She didn't care if she were in front of everyone.

"Well, isn't that a sweet thing, kiddos!" Gobber boomed "Its like an egg of fellowship that is!" He was completely oblivious to Bulljorn's deception. "Go-on lass, that's a lovely egg!" Gobber encouraged Bera.

Wordlessly Bera accepted the swirly egg from Bulljorn. She brought it back to Snotra and Droplaug.

"Well, it is pretty," Snotra said. She'd always been attracted to shiny things.

"She'll be a good dragon, whatever she is," Droplaug consoled.

Bera stroked the egg kindly. "Yes, she will. And hatching an egg isn't the only way to bring "useful" dragons to Outcast Island. By the time we're done on Berk, we'll be able to train an dragon we please," she said determinedly.

Later that evening, the students gathered again in the Arena around a huge pile of wood.

Residents were meandering to the stands, curious to watch the proceedings. The students were variously clad in study leather, or even armor, and many had shields.

"Now remember to write down everything in yer journals. If ya can't write, draw pictures. A picture tells a thousand words, ya know. I draw myself. We'll be having weekly reports on how yer raising yer babies," Gobber intoned.

Bera's journal was back at their assigned domicile, but Droplaug had her charcoal poised and ready to note anything.

As one, the students that had received eggs stepped forth and nestled their eggs around the edges of the wood pile, then stepped away. Many raised their shields in anticipation. Many types of dragon eggs were notorious for exploding, rather than a more sedate simple cracking open.

From somewhere above, a Nightmare blew fire at the wood pile and the dry logs burst into flames. Everyone grew instantly quiet, and the fire rapidly spread across the wood and engulfed the eggs. Slowly, one after another the eggs began to rock. Then there was a succession of loud pops and bangs, followed by squeals and chirps. Eggshell fragments rained down upon the students.

Hatchlings began stumbling out of the fire - Zipplebacks huffed and tied put their little necks and tails together, Gronckles rolled out like balls, Thunderdrums puffed themselves off the ground, and Timberjacks tripped over their wings.

A small pink hatchling tripped out and cried. Bera rushed forward to grab her up in a blanket, and blotted off the egg goo.

"A Mistwhirl! Bera she's a Mistwhirl!" Droplaug said excitedly. Bera didn't remember reading about that species and at the moment didn't much care as she hugged the baby close.

"Oh my, its so, um, delicate," Bulljorn appeared, already deeming the hatching weak and possibly worthless.

"She is just a baby, of course she's vulnerable!" Bera snarled, unable to keep her temper in check any longer. Bulljorn laughed meanly, pleased at finally getting a rise from her.

The hatchling burped suddenly, and a little puff of pink smoke blew out of her mouth. Bulljorn laughed harder. Then the dragon burped again and exhaled, producing a long spiral of multi-colored smoke, or gas. It floated over to Bulljorn. For a moment, everyone started at the swirling color. Then, it suddenly burst into flame and blew Bulljorn back several steps and charring his clothes. The girls were quiet in stunned silence for just a moment, then burst out laughing.

"That was pretty tough from a newborn gas dragon," Bera chuckled. The Mistwhirl chortled, too, liking the sound of laughter. The girls from Outcast Team 1 turned away and happily looked for some fish to feed Bera's new useful dragon. 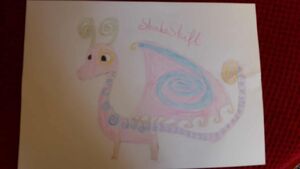 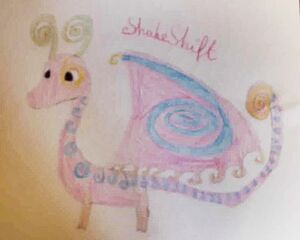 It's a dragon from Mystery Class. It's fire is a whirling mystery gas which is glowing. It can catch things with it's tail. It can change colours. If it want it can light with the same light as it's fire.

Community content is available under CC-BY-SA unless otherwise noted.