This is an OC character created to make a backstory for a fan-made dragon species called the Thunder Thief, created by Wutend Bonfire on the SOD Forums. The thread is "Behold the Thunderthief ~ Bonfire original species, request thread."

The two twin Fiskrspordr brother slowly maneuvered thru the sea stacks, away from their favorite land for freshwater fishing. There was a light breeze that tugged on the sail. Blasik pulled on the steer-board as needed to direct their small knarr ship back home to Berk. Between moments of steering, Blasik worked on cleaning the fish he and his brother, Storsik, had caught. Once gutted and rinsed, they packed the fish into barrels with chunks of ice which they had stored under the deck boards. That was a dragon rider's idea - they needn't wait for winter to mine ice and snow, when there were ice-breathing dragons around. The ice sat on oil-rubbed cloth out of the sunlight and cradled by the sea-dipped hull, so it melted quite slowly.

Storsik happily fed his strange juvenile dragon every bit of fish scrap they didn't need. His brother had saved the half-starved waif from a fishing basket. Knotfish, as he was named, was a Shadowing Wyvern with two greedy heads and a body quickly filling out and growing up. Except for his eternal appetite, Knotfish was a friendly dragon, and tried to be useful. For instance, he would probably lick the deck boards clean of every last fish scale, once they were done.

The larger sea stacks were dotted with patches of grasses or other vegetation, even an occasional twisted tree. Auks and albatrosses clung to the rocks and nested there, with large grey downy chicks amongst the sleek feathered adults. A few Terrible Terrors flitted about, and occasionally a dragon of some type or another flew high overhead. A few gulls were harrying their ship, waiting for an opportunity to swoop in and steal a fish. If they got too close to Knotfish's space, the young dragon would send up a very small blue burst of flame from one or both heads to warn them off. The first time he did that, the sail had caught fire. After that incident, the dragon learned very quickly not to catch any part of their ship on fire!

Knotfish grumbled occasionally. both heads peering around him uncertainly. "Don't worry Knotty, you can keep the gulls at bay," Blasik's brother chided.

Blasik watched Knotfish. It appeared to him that the dragon was looking past the few shrieking gulls, not at them. But there were no other sounds, other than the calls of the gulls, the water lapping at the sides of the boat, and an almost silent flush of air against his ear as an occasional puff of air blew past. It tickled his dark brown handle-bar mustache, almost like dragon breath.

The sea shimmered as the sun glinted off it. What was that? Blasik frowned, glancing at the water flowing past on the starboard side, near the steer-board. For a moment it almost looked like the water rippled in the wrong direction.

Storsik had his broad back to the pile of fish. Knotfish grumbled again, staring past his person at the fish pile. "Oi Knotty, just ignore the eels," Storsik told his dragon absentmindedly. He was somewhat attentive to his surroundings, but more focused on not flaying his hands while cleaning the fish. There were all manner of species - shad, greylings, trout, burbot, and of course eels, to name a few. There was alot of color and pattern variation, but the overall color base was the shiny silvery grey of fish scales. There was a long silvery eel tail poking out from the far side of the fish mound. Strange that - eels were typically darker and muddier. Their ship was nearly clear of the stacks, and the light breeze was pushing them slowly home, so Blasik stood up and walked over to the pile. The silver tail trailed into the pile. He touched it - not slimy at all - then tugged to pull it out.

The pile shrieked and fish flew in all directions as a smallish sinewy dragon the color of fish and the sea burst from the pile and winged silently into the air. Storsik jumped into a crouching position, clutching the filet knife tightly, and Knotfish thumped his club tail warningly against the deck boards.

Blasik let out a rather high-pitched yell and grabbed the nearest thing at hand: a brown trout. He flung it at the dragon before he could even think. The dragon caught it deftly and swallowed it down, while hovering around the ship.

"HA HA HA!"Storsik guffawed. "You screamed like a young lass, you did, Brother!"

"Did not," Blasik grumbled back at his brother's jest. He had kind of screamed, unbefitting of a Viking, but he wasn't about to admit it. "Start of a war cry, that," he replied, and tossed up another fish to the dragon. Again the lean dragon snatched it from the air and swallowed. Then he settled on the forward deck and cocked his head quizzically. The boat rocked downward, then back up. Knotfish huffed from both mouth irritably and bumped the bowl that the fish guts went in to.

Blasik stepped forward a few paces and tossed another fish to the dragon, which he happily ate. "Looks like a full grown Thunder Thief, dontcha think?" Blasik asked. "Haven't seen one in ages." 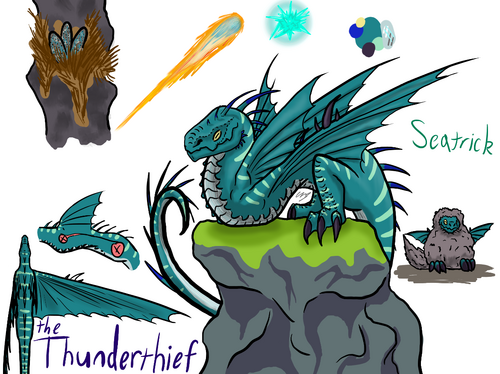 Storsik murmured assent and sat back down to work on the fish. The brothers had no quarrels with dragons.

Blasik moved closer still, until he was standing a mere few feet away. He placed a smaller fish into his hand, holding it flat and held it out. The dragon sniffed at his hand, then placed his muzzle on his palm and gently grasped the fish. The hide of his snout was a first rather soft, but hardened quickly into ridge running up the bridge of his nose. The dragon gave a cursory lick of Blasik's now empty hand and set back, making a grimacing noise. Humans tasted awful.

Blasik grabbed a couple more fish. This time though, the Thunder Thief too both in mouth, looked up to ascertain the location of the rigging, then jumped into the air. The knarr dipped down dangerously again, then back up. The sea-colored dragon flew off, back toward the slowly dwindling sea stacks.

"Pretty dragon, that," Blasik commented to his brother, who had assumed the steer-board. "The tricky beast was probably skulking about the boat the whole time!" He smiled good naturedly. Well, perhaps they would see him when next they made a fishing expedition out this way.

"There're probably others around those stacks," Storsik said. "I don't mind one, but we can't feed the lot of 'em."

Blasik grunted. Couldn't feed alot since most of the extra fish went into Knotfish's belly!

The brothers traveled on, at a sedate pace. The sun was warm and the breeze refreshing. Their square sail billowed and the sea lapped at the ship. They continued working their catch - cleaning and packing. Knotfish finally drowsed off next to Storsik. They worked in amiable silence.

Storsik broke the quiet. "Well I'll be. We might have to resort to fishing the salty sea, Brother."

"Hmm? What for?" Blasik asked. Storsik pointed above them. There was a fishy silver belly gliding along with the ship, just above the mast. The Thunder Thief had returned.

"Hey, you Sea Trickster!" Blasik hallooed up to the dragon. He rumbled in return. SeaTrick soared a while longer with the ship, riding the breeze. His wings made no sound at all. The sea stacks were pretty much gone from human sight. Eventually, the dragon landed at the bow of the ship, and sat like a sentinel. He propped open his wings, almost as if offering them as a sail to catch wind. He looked onward out to sea, watching for their destination.

"Well, Brother," Storsik said, "looks like you have yourself a dragon."

Blue/Green, the color of the sea

A small and sneaky dragon, the Thunderthief is a dragon worthy of Loki. Makings its nests on sea stacks and cliffs, while it isn’t too quiet itself, its unique scale shape on a microscopic level reduce the amount of sound that can rebound off it. Likely once hunted by Night Furies, hence the sound adaption, these crafty dragons are prized by Trappers for their flame. Their flame is a highly unstable crystal compound, formed in a pouch in the roof of their mouths. It ignites when exposed to nitrogen in the air, which means that it can be safely stored in water jugs. These pellets are called Spark Stones, and are often grounded into dust and sold as fire starters.

Usually found pinching from fishermen, lumberjacks, miners and shepherds, they can be easily trained if shown that they don’t have to steal from you, but are instead welcome. It’s a sign of trust to them, and shows that they are a part of your family or community. After all, sharing is caring.

They build nests on sea stacks and cliff faces, using mud and sticks to secure a bowl on the vertical surface to hold two to four eggs. They bake the mud by tricking Nadders and other dragons with intense fires to blast it since their fire isn’t hot enough, then use sticks and another layer of mud, this time sun dried, to create a soft floor. When the dragon hatches, it’s covered in a thick layer of grey down feathers that make it look bigger than it is, keep it warm and soften any potential falls. It loses all of its feathers at about three years of age, and can independently fly at about five. They mentally mature at around thirteen, and live to 80.

Retrieved from "https://httydfanon.fandom.com/wiki/Blasik_Fiskrspordr?oldid=35738"
Community content is available under CC-BY-SA unless otherwise noted.