This is an OC character story written to "adopt" an OC dragon species called the Swamp Scrape by Grumpyforlife2, seen on the School of Dragons Forums at here. Update: Bogbert was successful!

In one area of Berk, down a treed ridge, the land lay particularly flat. At the bottom of the ridge was a large shallow pond composed of rainwater and groundwater, and a little snow run-off. No streams fed it, so it was rather stagnant. The other side of the pond broke up into boggy land, squishy and covered with sphagnum. The few trees that were able to grow in the water-logged soil were gnarled and stunted, not much bigger than the low shrubs. Eventually the land sloped upward again ever so slightly, giving way to heathered moors. Fish were scarce in the anoxic acidic water, but there were many insects and frogs, too. There were also many of Berk's resident Mudrakers, wallowing about in the cool muck like scaly swine.

It was to this area Bogbert Margrkind trotted cheerfully. He was often able to slip away from chores and not be missed, for his family was so large, there was a lot of extra time on their hands. He was a scrawny boy of seven years, or perhaps a little younger. He stopped by some bog myrtle and wove some leaves and catkins haphazardly into his dirty blonde hair to keep away the insects. Closer still there were many low bilberry bushes, and he filled his belt pouch with the sweet berries. He wore only a loose tunic, a belt with a pouch and a small knife, and raggedy trousers that stopped at his calves. His feet were bear - footwear would only be sucked into the muck and never be seen again.

Bogbert arrived at a group of grunting Mudrakers. "Hello, Muddies!" he said cheerfully. All Mudrakers were 'Muddie' to him. The nearest looked up at him, half-submerged in mud, as Bogbert clamored up on to the dragon's exposed purple side and sprawled out. The Mudraker flipped her tail, pelleting the boy with bits of mud. He giggled, then pulled out the berries and ate them one by one. He gazed into the sky and watched as cloud-sheep floated by, but more cloud-dragons too shape and chased away the fluffy sheep. After the last bilberry was done, he fidgeted a few minutes more. But as a small boy, his body itched to be busy.

Bogbert rolled off the side of the lounging Mudraker and splatted into the mire. Mud speckled the dragon's already dirty hide. "You aren't taking a mud bath right, Muddie," he explained to the tolerant dragon, and proceeded to slap more mud on the creature's neck and behind her ears. 'Muddie' didn't mind at all - this was a very hard place to reach, after all.

When Bogbert was satisfied with purple Muddie, he moved over to teal Muddie, which required a little wading through some still water. Teal Muddie grunted in acknowledgement. The boy slopped on some mud on the dragon, and started to rub.

A stream of hot mud suddenly splatted the boy on his left side. He turned to see its source, but found he wasn't able to move very well. Teal Muddie and Purple Muddie both growled irritably and moved their heads in front of the boy, as if to shield him from more onslaught of mud. No more came. The magic paralyzing mud was warm and runny; Bogbert contemplated for a moment since he couldn't do much else - he rather liked mud a little more malleable and cool. A few minutes more, and his muscles loosened up again, and the boy scampered up onto teal Muddie. He scanned the bog and pond but saw nothing out of the ordinary. Nothing except a disturbance in the water and what appeared to be a few brown twigs poking out of the water.

The twigs moved upward and gave way to wings and a creature that very much looked like a smaller, very dully, very mucky, Razorwhip. This muddy dragon shot out his heated mud, but the boy was nimble and ducked behind the teal Mudraker's sail. The mud-spit slapped harmlessly on the other dragon's sail, for that amount was nothing to a Mudraker's thick hide. Teal Muddie was extremely displeased, and let out a low roar and snapped in the boggy dragon's direction. The bog dragon looked quite horrified, having just shot a member of the only species of dragon that tolerated it. It was lonely living in a mire. The dull grey dragon re-submerged out of view, especially out of sight of the small threatening human mite, and a little from embarrassment. 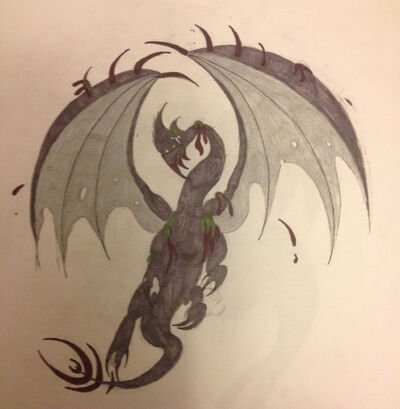 Bogbert slid off teal Muddie, and moved closer to dark blue Muddie. He started making an arsenal of mud-balls and laid them on a sphagnum mat. He lobbed one at the water where the strange bog dragon was submerged.

"Not fair! I can't breathe underwater!" Neither could the dragon, but little boys needed to inhale far more than a dragon. Bogbert threw another mud-ball. The bog dragon overcame his cowardice and raised his head menacingly, growling. A few of the Mudrakers watched a growled warningly, but continued to lounge. Splat. A mud-ball hit the dirty dragon square on the cheek. The dragon blinked in shock. Did he just get hit with mud? No other creature was able to hit him with mud, save another of his kind, which rarely happened. The experience was momentarily un-nerving.

Another mud ball hit his neck "I got you! I got you!" The boy danced around in the brown water.

The bog dragon growled again and spat his paralyzing mud at the two-legged imp. Bogbert dodged it successfully and, giggling, threw another mud-ball. This one was a little off in aim and merely left a brown streak on the dragon's grey hide. The dragon shot again and this time hit the busy little boy in the chest and froze him momentarily. "Youuu goooot meeee," the boy lisped out.

This was the time to retreat when the enemy was paralyzed. Yet the Mudrakers did not resent this nuisance. Nor were its little mud-balls very effective. The dragon leaned in to take a sniff. His breath ruffled the dirty blonde hair. Musky mammalian and bog myrtle and bilberry, mud, and a little sheep. Not very threatening, though he wasn't sure if the mammal smell was trustworthy.

"Dooo youuu st-still want to play?" Bogbert's jaw worked loose and he reached up and scratched the dragon on the cheek. The dragon blinked again in utter surprise. The boy was touching him?? And ... it was not a bad sensation. Still the dragon opened his jaws point-blank to shoot then retreat ... and got thwacked squarely on the rump by the dark blue Mudraker.

Teal Muddie kicked up some mud and splatted both the boy and the strange dragon. Bogbert squealed in delight and splashed around behind dark blue Muddie and lobbed a mud-ball each at teal Muddie and the mud-dragon. The mud dragon half-heartedly spat out mud in the boy's direction, not wanting to hit a Mudraker.

Was this small human playing?

Bogbert dashed back around the Mudraker and threw a mud-ball at the grey dragon's side. "Quagmire! Quagmire! You can't catch me!" the boy playfully taunted. It had seemed the bog dragon had been named, though Bogbert was unlikely to see another 'Quagmire', like the many 'Muddies' he knew.

Quagmire shot mud and froze the buzzing boy. He sniffed the human again and rubbed his other cheek on Bogbert's head, as he had an itch there. The human was a decent scratching post. As Bogbert loosened up again, he rubbed the dragon under the chin. "Are you itchy Quagmire?" he asked as he grabbed a large fistful of rough marsh grass. He proceeded to rub down the dragon's hide, as a stable boy would do to a pony with a fistful of hay. The dragon was quiet and contemplative, and spat no more mud. This was not scary at all and rather pleasing. The boy did not live here, though, and he would disappear soon to the non-boggy regions of this island. No more nuisance. But, the dragon wondered, would he come back again?

Like most Swamp Scrapes, he is a loner, but likes the company of Mudrakers. He is nervous around humans, especially adults. However, children aren't too bad and he can get comfortable around them, and even play. He especially likes mud-ball fights and playing fetch with a floating ball. He tends to shoot and hide first, ask questions later. Loves to be rubbed down. Pretty much stays in his bog, but does venture out to the outskirts of town to see where the Mudrakers go, and what the children do. He can swim and fly well, and has to venture to cleaner waters to fish. He does like nibbling on assorted bog berries and bog myrtle, and eating insects and grubs that live around his bog.

(As written by the species creator Grumpyforlife2 on her adoption thread: "Grumpy cats new art thread")

ok so let me tell you about each of the adoptables.the grey one is called a swampscrape.they come from the mystery class because nobody has ever really gotten a good look at one because of its nevous and cowardly nature.they live in dense swamp areas and can often be found with the only dragons they trust,mudrakers.when a swampscrape is spotted it spews super heated mud at its victim leaving the human or dragon temporarily paralized.this gives the swampscrape just enough time to again bury itself in the muck and mud of its swamp,dissapearing from view once again.

There are a number of other stories about members of the Margrkind family and their "adopted" dragons including: