Buggi the Beetle is an OC character created to accompany a Marsh Tiger dragon adoptable rendered by Themasterplan47 on the School of Dragons Forum thread: HTTYD Book Dragon Requests!

With their satchels filled with smelly fish and food stuff, the three boys of the Dragon Academy's Meathead Team Three traipsed through the hills and rocky passes on the Isle of Berk. They were headed toward the Northern Swamp at the North end of the island.

"Almost there!" Runfaster chirped, far too perky after hiking for such a long time.

"Hmmm," Flaemingr grunted, concentrating on not tangling his long lanky legs as he walked.

"Why are we doing this, again?" Buggi huffed, falling behind the other two, again. He was a bit rounder and more short-legged than the others, and his eyes kind of bugged out. Runfastr was small but quick with boundless energy like a Speed Stinger. Flaemingr was tall and lean and a bit bumbly, more like an adolescent wading bird. Buggi was like a ... a Gronckle. I'm like a squatty round Gronckle, he thought to himself. He wasn't going to think about the other animals he could be compared to.

Buggi sighed. They were doing Gobber's bidding, in the guise of training. Berk's resident Mudrakers had shuffled around the island and settled in the Northern Swamp. But it was time for Gobber to check their teeth, as Berk's de-facto Dragon Dentist. Preventative dental care meant less chance of rampaging dragons around the island later. Buggi's team was to get the Mudrakers to fly back to Berk so Gobber could check them over. They were to use their learning from the Academy to get the dragons to come back.

Runfastrr reached a crest and shouted, "There it is!" He called out to the Mudrakers, attempting to imitate their call, "Awg-glurgerr!" About a dozen Mudrakers were resting an wallowing in the bog below. A few merely glanced up at Runfastr's outburst, but not particularly moved by his attempt at a dragon call.

Flaemingr settled on a boulder and pulled out a tall pair of boots to put on. Buggi panted up beside him and pulled out his much shorter pair and donned them. He then stood and let out a much deeper call, "Arrg-gwal-gwaluuaa!" It might have echoes off a nearby cliff, he thought with some satisfaction. But only a few more Mudrakers lifted their heads to look, then away again.

Flaemingr tried his turn, but this time none even bothered glancing at them.

The boys wended their way down to the swamp and into the nearly black mud, trying to keep to the clumps of marsh grass to avoid sinking into the mud or going hip-deep in stagnant water.

"Alright gang, let's go back to Berk! Get your teeth checked, and then fish for everyone!" Runfastr declared. He darted amongst the dragons, handing out the fish they had brought along in quantity. Flaemingr held out a cod to a purple Mudraker, trying to coax her out of the mud and follow him. She suddenly lunged forward unexpectedly, snapped up the dangling fish, and settle right back down into the mud again. The dragons were interested in the fish, but not enough to move very far.

Buggi pulled a fish out from his stash, petting a blue-colored Mudraker slowly and feeding him a fish. "Alright, let's fly back to Berk, okay?" The Mudraker thanked him with a sloppy lick, but Buggi took it as affirmation and he climbed up onto the lounging dragon's wide back. The blue dragon looked at him quizzically for a moment, then laid his head back down to nap.

"So are Mudrakers, you know, like Nightmares? Maybe we need to take a firm hand," Flaemingr suggested, sounding dubious even to himself.

Sometimes hot-headed dragons like a Nightmare needed a dominance display. Buggi piped up to correct him. "No, no, that probably won't w--" he was cut short as Runfastr tackled the wide blunt horn of a brown Mudraker and got flung into the mud for his efforts. Flaemingr snickered. Buggi just shook his head. His friend had little patience.

Buggi slid off the blue Mudraker's back and pulled out another fish to bribe another dragon with. Maybe they just needed to wait until the dragons got hungrier.

"Death Song! Maybe we could get a Death Song to fly over and scare them back to Berk!" Runfastr suggested.

"That might get them moving. If we had a Deathsong. And Gobber just wanted to get them to Berk, not destroy Berk from a stampede," Flaemingr countered.

"Hey," Buggi started, moving the fish in his hand around as he talked, "What if we bring Gobber here instead?"

"But he said to bring them to Berk," Flaemingr responded.

Runfastr was busy flinging mud off himself, as another Mudraker flicked more at him with its tail.

"Well, not exactly. Gobber said he needs to see the Mudrakers for their annual dental check-up, and to go get them," Buggi recalled.

"I don't think he meant bringing him to the dragons, though," Flaemingr said.

Buggi shrugged, fish hanging limply at his side. "Well, its an idea, anyway."

There was a flash of orange the color of flame near Buggi, and the fish in his hand vanished into the mud and water. Buggi stared at his empty hand for a moment. "Oh." He looked behind him at the stagnant water. Two bright green eyes and two muddy-colored nostrils peeped out of the surface, watching him.

"Oh!" Buggi exclaimed with a little more enthusiasm. It was a different dragon. Not a Mudraker. Not a Flying Gator either, since the eye and nostril spacing wasn't far enough apart.

Buggi reached into his bag again and pulled out a trout and dangled it in front of him. "Come on. You want another?" he coaxed. The submerged dragon eyed the fish hungrily. He lifted his head out slowly, shifting his gaze between Buggi and the fish. Then he splashed forward quickly, grabbed the fish, and retreated back. This time, however, he only submerged half way.

"Oooo! A juvenile Marsh Tiger. Short Wing," Buggi breathed, excited. He pulled out another fish and offered it to the teen dragon. He was a dark muddy color and blended well with his environment, except for the bright flame orange stripes over his body. The Marsh Tiger eased forward again, swiped the fish from his hand and chewed on it, but didn't retreat this time. Bye the fourth fish Buggi was scratching him under the chin.

"Marsh Tiger. Stoker Class. Lives in swampy areas," Buggi intoned out loud, more to himself than anyone else. He moved his hand behind the dragon's eye to scratch. "You're almost full grown. Adults are about the size of a Deadly Nadder. The fire is--"

"Stoker Class, eh? Let's tame you!" Runfastr shouted and launched himself at the Marsh Tiger. He grabbed at the dragon's neck in an attempt to mount.

"No! No! That's not how you tra--," Buggi was yet again cut off as the Marsh Tiger released a loud peal of distress and bucked off the barely-clinging Runfastr. Runfastr sailed backward through the air and thumped onto the back of a Mudraker. The Marsh Tiger bolted forward in fear, wailing in distress. The Mudrakers started grunting and raising their heads, disturbed by the distress calls. 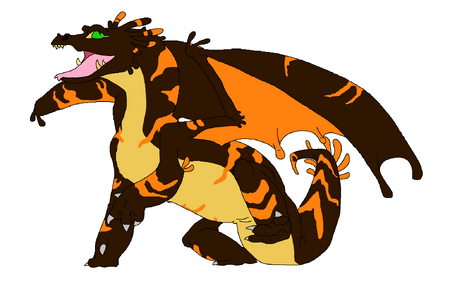 Flaemingr sighed, watching events unfold. He climbed atop a rising Mudraker for a better view. It was possibly going to be the safest place to be in a few moments.

The Marsh Tiger surged forward, dodging Mudrakers and flapping his wings. He glided across the swamp and jogged partway up the hill. Buggi walked rapidly after the frightened dragon to catch up to him, but trying not to scare him further. He held out a fish swinging back and forth in his hand.

Marsh Tigers were ambush predators with highly contrasting stripes to confuse their prey. They were Stoker Class despite their love of marshes. They breathed fire like most dragons and like baking the mud. They were just as weren't as 'flame-boyant' in behavior as many other Stokers like the Monstrous Nightmare. This particular one seemed to have left the nest and took it easy hanging out with the larger Mudrakers rather than practicing flight, it seemed.

Desperate to catch up to the dragon, Buggi belted out his best impression of the Marsh Tiger himself. "EEEE-AAUUG-RREE! Eeee-aauug-reee!"

Behind him, the Mudrakers stirred even more. At Buggi's outburst, the Marsh Tiger slowed and looked back at the human who mimicked his voice. "Eeee-aauug-ree?" the dragon replied, sounding confused.

"Eeee-aug-re." Buggi replied, catching up to the dragon. The Marsh Tiger blinked at him a yelled "EEEE-AAUUG-RREEE!" in the boy's face. Buggi held out the fish which the dragon nearly swallowed whole. He stroked and soothed the dragon again, and, having not yet heard any other sounds in the Marsh Tiger's repertoire, gently crooned "eeee-aauugg-ree." The dragon nuzzled him back and Buggi rubbed along the dragon's body. "You definitely need to exercise your wings more," Buggi spoke softly.

Behind them the ground started trembling a deep thunder rose up. The Mudrakers charged toward them and all the distress call sounds of their little Marsh Tiger tag-along. Both boy and dragon stared behind them wide-eyed in surprise.

"Eeee-aauug-reee!" the Marsh Tiger panicked and took off again. Buggi reflexively grabbed onto him and bumped along, else he might be trampled, too.

Flaemingr bounced along, practically unnoticed on the back of one Mudraker. Runfastr was presumably mired in the mud. He ran fast, but probably wouldn't be able to catch up to the herd.

Buggi might be a bit rotund, but he was muscly and he heaved himself atop the Marsh Tiger. The dragon ran and glided, focused on not being flattened by the grunting, roaring Mudrakers. The whole motley group was moving in the direction of Berk.

"Well, at least the Mudrakers are going toward Berk ..." Buggi muttered to himself. They should be calmer once they get there. Hopefully.

About the Marsh Tiger

I took some liberties with details about the Marsh Tiger, such as assigning it to the Stoker Class. Book dragon species are classified differently than the Franchise. Also assuming fire breath and liking to bake mud is speculation, as well.