Cutthroat is a dragon rider whose dragon is a young Screaming Death named Shriek.

Cutthroat has a tall slender body with black hair, very pale blue eyes, dark rings around his eyes and a hideous scar going across his neck, giving him his name. He keeps a dragon tooth as an earring through his left ear. Cutthroat is a loner, anti-social, preferring the companion of himself until he found his own dragon. Cutthroat has the odd habit of cutting up things, fabric and wood (and sometimes people) with his knives. After getting his own dragon, Cutthroat's personality changed a bit, showing a more calmer and nurturing side of him, but only to his dragon and those closest to him.

Besides his dragon, Cutthroat has some friends who managed to tolerate his weirdness. Those being Hangnail, Cantona and Rafola. He later befriends Ivory and becomes good friends with like-minded Jasper. They have a son named Whiplash.

Cutthroat was born in the village of Frost Fall, was an quiet child. He took to a liking to blacksmithing and learn all he could from his uncle, the town's blacksmith. Cutthroat had picked up some tips on how to bend metal by observing the local blacksmith and self experimenting. With this knowledge he crafted his own knives from metal and dragon bone. Cutthroat became very skilled at a young age. Then his mother disappeared during a harsh winter when Cutthroat was just 12, and his father died two years later from an illness leaving him in the care of his older and equally weird brother Jack Knife. Their home was later damaged by an avalanche caused by a frightened dragon and they had to repair their home with animal skins and bits and pieces of left over dragon bones they collected at the bone yard. Sometime after his 15 birthday Cutthroat's brother disappeared in the forest, leaving him alone. Cutthroat learned how to care for himself by then.

Cutthroat was a young child when the first Dragon Riders of Berk started to visit Frost Fall and teach the people how to tame dragons, however by this time the people of Frost Fall had already manage to tame some dragon species on their own. Some years later Cutthroat found a dragon egg in the forest and decided to claim it for himself. He took care of the egg and it hatched into a Screaming Death that he named Shriek. Since then Cutthroat could be seen in the forest or wandering around the village with his dragon close behind.

Later after a series of dragon attacks Cutthroat joins Ivory Clan to help investigate the odd events. He takes on the occupation of Blacksmith shortly after. He eventually came into contact with his older brother who had been living in the mountain known as the Pillar. He and Shriek helped Jack Knife free his dragon Black Death. 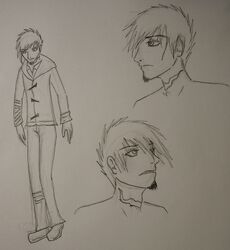 Sketchs of Cutthroat
Add a photo to this gallery

Retrieved from "https://httydfanon.fandom.com/wiki/Cutthroat?oldid=11840"
Community content is available under CC-BY-SA unless otherwise noted.