Start a Wiki
Ember is a Deadly Nadder and the dragon of Aniju.

Ember is a light purple Deadly Nadder with a pale blue underside and pink and blue horns, spikes and claws. She has pale pink rings on her tail. Ember has a sweet-tooth and will do anything to get a treat. Ember is very indepent and clean, she often is seen grooming herself, and licking her wings clean. She doesn't like getting dirty.

Aniju befriended Ember when she and the rest of Ivory came to Frost Fall. During the invasion of Frost Fall, Emder fell under the Bewilderbeast Snowblaze's control, forcing Aniju to seek help from Emo. In the end Emder was able to be freed thanks to Dante and helped drive off Ragnarok. Ember returned to Aniju after the battle and helped to repair Frost Fall. 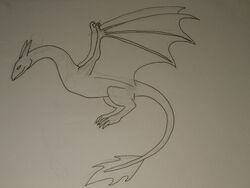 Ember's original design
Add a photo to this gallery

Retrieved from "https://httydfanon.fandom.com/wiki/Ember?oldid=11714"
Community content is available under CC-BY-SA unless otherwise noted.