This story was adapted to accompany the 'adoption' of a Deepfisher, a fan-species created by Hootowllighbulb on the School of Dragons Forum thread, Deepfisher Adoptables!"

In a Sea of Eggs

The Dragon Academy Arena on Berk was filled with students. At the center was a long table with many crates on it. They were lined carefully with hay and soft cloth, on top of which were dragon eggs  of many colors and sizes.

The original Dragon Riders had raided a Dragon Auction compound and came away with a large number of Dragon Eggs. There was nothing to do but bring them back to Berk. The Riders and the village Elders decided to dole out the eggs to the students to raise and train and learn. The students were divvied up into teams of three, and those that did not have anyone who had yet trained a dragon were given priority.

One tall lanky Meathead boy stood on one leg, tapping the foot on the other leg. His strawberry blonde hair fanned out around his ruddy face, which was trying hard to concentrate on the dragon eggs. "So which one?" he whispered yet again to his teammates, Buggi and Runfaster.

Runfastr shrugged. "How about something quick, like a Nadder? It looks like there's a Windstriker, how about trying for that one?"

"A Zippleback might be nice. They'll grow big enough to carry all three of us," Buggi suggested.

Flaemingr scratched his chin. "I was thinking Boulder Class, they're so useful ..."

"Oh look! Do you know what that swirly rainbow egg is? Or that brown leathery one with the shimmery pink swirls?" Runfastr interrupted excitedly.

The other two boys shook their heads from side to side. "I suppose it would be neat to bring home some exotic dragon to Meathead Island," Flaemingr speculated.

"We could train it to do all sorts of fantastic things," Buggi supplied.

"Well, gotta see what choices I have first," Flaemingr replied, nibbling on his lower lip.

Gobber called up some students who had already trained a dragon or two, to hand out the eggs. Each would pull an egg out of the bunch. Then Gobber would call a team, and a team member would select an egg from those the senior students held.

"So an exotic egg is first choice, then Zippleback, then Nadder, okay?" Runfastr whispered in Flaemingr's ear.

Flaemingr nodded in agreement, and flicked his fingers absently. They moved forward and waited their turn to be called.

"Berk Team 15!" Gobber bellowed. A red-headed boy stepped up to the table and looked at the eggs the seniors held before them. He chose a speckled one at last and retreated back to his teammates to show off the egg.

Flaemingr nearly jumped with surprise. So soon? Buggi pushed him forward a little more forcefully toward the tables. He tapped his index finger anxiously on his thigh. Which one? The senior students each held out an egg toward him. There was a Zippleback, a Gronkle, a Thunderdrum ... no, no, no tidal class. He couldn't swim. A Whispering Death ... they were almost too scary ... then there was the exotic egg with pink shimmers. His nodded to himself and moved over to the blonde girl holding that egg. They exchanged smiles as he took the egg from her and held it close. It was a muddy brown, but that served to bring out the streaks of glittery rose-pink its sides. Its surface was kind of leathery, yet firm.

Flaemingr trotted back to Baggi and Runfastr to show them the chosen egg.

Later that day, the students gathered around a large stack of wood at the center of the Arena. Those who had received an egg placed them at the edges of the pile and stepped back.

Flaemingr set their egg down next to the wood and retreated behind an old but large shield that Buggi was propping up on the ground. Various other students also had shields or wore armor.

"Do you think ours will explode?" Flaemingr murmured, picking at the edge of the shield. Buggi just shrugged.

Gobber stood in front of the pyre and started to talk. "Now remember to write down everything in yer journals. If ya can't write, draw pictures. A picture tells a thousand words, ya know. I draw myself. We'll be having weekly reports on how yer raising yer babies."

There was a green and yellow Nightmare hovering very low over the Arena, who released a stream of hot fire onto the wood. The pile ignited quickly and it burst into flames. All the dragon eggs around the edge were engulfed. The students and bystanders hushed. Nothing happened for a moment, then the eggs started rocking and twitching. Flaemingr and his friends crouched behind the shield.There were bangs and pops and cracks and booms. The muddy glow-striped egg didn't explode however, but rather split into four quarters, revealing a distraught dragonet. Despite just hatching, the baby was surprisingly free of the customary egg goo. She made a gurgling, shrieking cry at the fire around her and wriggled as fast as her newborn muscles could muster. She had toe-less rear legs with dark rose fins bending this way and that.

Flaemingr groaned. She was a Tidal Class dragon. But the Viking boy ran forward amongst the flying egg shells and scooped up the wailing beast. "Water! She needs water!" Sea dragons didn't often hatch in fire like for terrestrial species, though it was obviously possible. The poor egg should have been bathed regularly, or at least misted to keep it hydrated.

Buggi jumped up, still grasping the long shield, and held it in front of himself, Flaemingr, and the hatchling. He started bulldozing his way through the crowd. Runfastr sprinted ahead and zig-zagged between Vikings to locate a bucket or trough or something of water.

The little Tidal Class dragon huddled up close to Flaemingr's face, relishing the warm moist air of his breath. "We'll get you some water, don't worry," Flaemingr comforted her softly.

"Over here!" Runfastr shouted, finding some barrels and buckets of water that were going to be used to douse the hatching fire. Buggi pushed them through to the barrels, and Flaemingr stepped up to one. The trio of gawky teens could work well together when in a pinch.

The baby dragon pushed off Flaemingr's chest and splashed right into the water. She submerged completely and didn't come back up right away.

"Do you think she's okay?" Flaemingr asked worriedly, chewing on his lip again.

Flaemingr cast his eyes downward for a moment. "Yeah, I noticed," he said, ever so slightly disappointed.

"Oh that's right! You can't swim! How'er you gonna train a Tidal Class dragon?" Runfastr stated the obvious, not noticing Flaemingr's frown and the slightly darker red of his cheeks.

The boys were silent for a few moments more. The baby finally floated to the top of the barrel, looking much more refreshed. She gurgled happily and opened her mouth expectantly at Flaemingr. Now that she was hatched and hydrated, she was hungry.

Flaemingr pulled her out of the water and held her to his chest, despite her wetness, and stroked her soft scales. "GlimmerGills," he cooed at the little dragon. He started bouncing her gently, and turned to his friends. "You know we're _supposed_ to be learning here, right?" Not knowing how to swim was a bit of a sore point for him, so he tried to put a positive spin on it. GlimmerGills was very rapidly growing on him, after all.

"Well GlimmerGill's going to teach us how to swim!"

Buggi and Runfastr nodded in agreement. Of course they both knew how to swim, but perhaps with this little sea dragon, there was yet hope for Flaemingr. 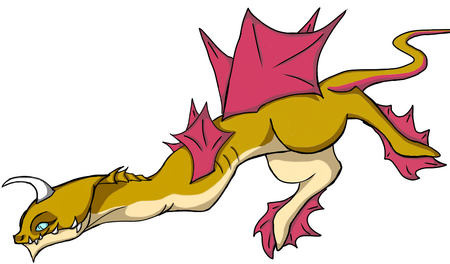 (Taken directly from the creator's description)

Shoots electricity (uses it to light it's way sometimes)

Has a shot limit of 7

Lives in the depths of the sea

Retrieved from "https://httydfanon.fandom.com/wiki/Flaemingr_the_Fidget?oldid=35864"
Community content is available under CC-BY-SA unless otherwise noted.