This character was designed to accompany the adoption of a fan-species dragon called the Armorhead, created by FloofQueen on the SOD Forum topic, "Armorhead Adoptable by FloofQueen."

Gerta sat quietly on an old stump. The air at dusk was a bit chilly on her old bones, but she also found it refreshing. The chickens slowly meandered back to their coop. Soon, they would all be inside for the night and Gerta could shut it up until the next morning.

Marit, her granddaughter, was off on a trip, riding that SeaSong dragon she had befriended. She now had the means to carry a few supplies to her husband and the other crew while they were out on a long fishing trip. Their families had gathered dried fruits, pickles, flat breads, and some dried meats to send along. And Marit had taken her toddler son along. On a dragon.

Gerta was old. For most of her life, Berk fought dragons and protected themselves, their homes, and livestock from their maraudering. They were dangerous and unpredictable. And this SeaSong of Marit's could enchant sailors with their voices and lure them to a death upon a rocky shore. Well, she couldn't remember the last time that had actually happened on Berk ... maybe it happened to someone from another tribe? Nevermind the soothing songs of Marit's dragon helped her sleep easier and that of her fussy great-grandson. And the dragon hadn't hurt a hair on anyone's head - so far.

Gerta sat, as still as a statue, contemplating the way things were and how things used to be. At first she didn't hear the rustling of leaves near the extensive compost pile at the edge of their little homestead's clearing. An odd dragon-creature emerged from the woods, standing straight up, its head waving, scenting the air with huge nostrils. She clucked a few times to herself, then bent over, sniffing toward the compost pile.

"What the Frigga?" Gerta swore under her breath. She stayed absolutely still. She may be old, but she had no wish to become a dragon snack. Upon hearing the whispered curse, the dragon stood upright again, frozen, except for its swiveling head and flaring nostrils. She turned in Gerta's direction, smelling. There was a human odor about the farm, and pretty fresh, but it was always there, whether a human was actually present or not. The dragon had no eyes in her head, so couldn't see Gerta sitting plainly on the stump near by. After a long moment, the dragon returned its attention to the compost pile. She scratched at the refuse with her two legs like a chicken unearthing grubs and seeds. She grabbed up and gobbled down old fish heads and anything else edible it found. 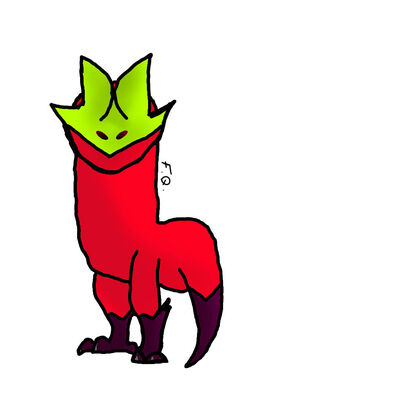 The dragon did look rather skinny, not at all like the fat and happy so-called trained dragons. Come to think of it as Gerta recalled, she had heard some news from her cronies in the quilting circle. Recently, the Original Dragon Riders had raided yet another Dragon Hunter ship. Now, Gerta was not fond of dragons, but she would have been content leaving dragons alone if they were leaving Vikings alone. She didn't condone going out and antagonizing the beasts and caging and butchering them as the Hunters did. On this particular ship, the Riders had brought back some flightless dragons, who couldn't fly away once freed. ArmorScales? ArmorHeads? Something like that. They were excellent trackers, or so she heard. Some bumbling dragon rider student had opened their cage prematurely, and evidently these Armor-Somethings were quite fearful. They spooked and ran from the cage, scattering across the island. Gerta bet this was one of them. If so, she ought to chase off the cowardly thing right now.

But Gerta remained still. After all, she was only hungry, and some missing compost was not really an issue. The ArmorHead picked out everything that smelled nourishing, then quietly slunk back into the woods. It was almost completely dark now. Gerta stood up and closed the chicken coop, then went inside.

The morning sun filtered into Gerta's yard. She stoked a smouldering fire of oak kindling and threw a generous heap of pine needles on it. There wasn't much flame, but quite a lot of smoke. Beside her was a small barrel, whose lid was weighted down with stones. She slowly removed the stones, her old bones protesting just a bit. Once the stones lay on the ground, she lifted the barrel lid and peered inside. There were herring and a few pout, split and gutted and layered in a salted brine. Marit had brought them back about a week past, and had been curing in the brine ever since. Gerta carefully stabbed each one with a long two-pronged fork and organized them onto racks that were situated over the fire and in the middle of the thick smoke. Satisfied with the fishes' arrangement, she puttered about at her other chores for the day.

Late that afternoon, Gerta sat near the fire, out of the path of the drifting fishy smoke. The kippers were nearly done. Gerta looked up as she heard a tentative grunt. The Armorhead was back, picking at the compost pile. hw lifted her head, sniffing the air, scenting the smoking fish. Gerta started humming and talking softly, mostly to herself. With the smoke most likely damping her smell, the humming would acclimate the skiddish creature to a human voice. No doubt the dragon was done with the rough, loud sneering sounds of the Hunters. The dragon crept forward - taking a few steps, pausing to sniff, then taking a few more steps.

"There's a lovely dragon," Gerta cooed. You're the color of a ripe spring Jordbaer, a Strawberry, you are." She wasn't exactly sure why she was coaxing the odd dragon. Perhaps it was the creature's shyness, an attraction to her chicken-like behavior, or perhaps it was a challenge for the old woman.

The strawberry Armorhead slunk closer to the fire. The heat didn't bother her, but the herring smelled divine. As Gerta started to direct her speech to the dragon, Jordbaer looked toward her with unseeing eye depressions. Gerta could see small white scars marring the hide and scales on her neck. She clucked in annoyance. "Poor beasty shouldn'tive been in shackles." Jordbaer clucked back, sounding nearly like a hen. Gerta wondered if Armorheads crowed, too. She calmly pulled out a warm fish and held it out.

Jordbaer sniffed all around the fire, somewhat confused by the shifting odor and smoke, until she came upon a stronger area of delectable fish scent. Human smell was mixed in, too, but it was the human whose scent pervaded the entire yard, so it wasn't very alarming.

Gerta held out the fish by the tail. She didn't want to inadvertently loose any of her old digits, after all. The dragon poked out her pointy tongue and wiped it over the fish, then delicately plucked it from her fingers. Jordbaer sat back and chewed, flipping her head this way and that, listening to the human murmuring and keeping track of the smells. She detected no malice upon the air, and her belly urged her to seek more smoked fish. Gerta pulled out another kippered herring and held it up. Jordbaer tracked the scent of the fish, then plucked it from her hand. The old woman repeated the process, but this time waggled her fingers under the fish and tickled the Armorhead's chin. The dragon jerked back in surprise, but the sensation was not unpleasant. Gerta repeated handing over more fish, and got closer each time, and was finally able to give a good chin scratch without the dragon bolting.

At this point, Jordbaer was fairly satiated, so she stepped away from the fire and sat down for a bit, sitting much like a nesting hen.

"Just as well, Strawberry, I need to keep some of these for myself!" Gerta exclaimed. She removed the fish from the smoky fire and packed them in oilcloth. After turning and dousing the fire, Gerta shut up the chickens and retired for the night. Jordbaer had already slipped silently away.

The next evening, Jordbaer appeared, rooted around the compost pile, then sniffed about the yard. Gerta was sitting on her stump and smiled to herself. She had suspected the beast would return. The quickest way to a man's - or dragon's - heart was through their stomach. She was prepared and had some dried cod in her pockets. Jordbaer slowly crept up to her and took the offered fish and tolerated a few scratches at the end of her face plate. It got rather itchy there.

So, most evenings, just before dusk, Jordbaer showed up scrounging for food, a few pats, and a little companionship. Gerta didn't mind, but what on Midgard would the other Vikings her age think? She snorted to herself. At least now this tracker dragon might be able to help her find her keys and her favorite paring knife she kept misplacing!

Abilities: Headbutt can break a large boulder without giving it a headache. Scales are thick as a Screaming Death's. They have no eyes, but have an amazing sense of smell.

Personality: Cowardice. They get easily spooked by anything even with how sturdy they are. In the face of danger, they will most likely ditch their rider to hide. Training one is hard, they are afraid of humans and run at the sight of them.