How to Train Your Dragon Fanon Wiki
Register
Don't have an account?
Sign In
Advertisement
in: Viking characters, Females, Vikings, Nightfury4eva's fanon

Kaya was born on the island of Skalder. her parents were very loving and supportive. they were a little overprotective and sure they sometimes fought but at the end of the day they were all on the same team. their village was constantly ransacked by dragons, stealing food and whatever they could get their claws on. she would sit on the roof and watch as the few dragon riders they had went off to stop those raids. her little brother Cal would always annoy her about never being able to have a dragon. but one day that all changed when she came across a little strange fuzzy dragon stuck in a hunter's trap. after a little while of enduring multiple bites to her hand, Kaya freed the little dragon brought it home. she named the purple dragon Elka. Elka was Kaya's best friend and only dragon for a year. she then found another dragon suck in a trap, she freed this one as well it was a Titan flightmare named Nightshade (because she was found next to a patch of deadly Nightshade) together they brought back 5 more dragons. when she was 13 she was shot out of the sky by some mercenaries she decided to join them because it looked fun. there she was nicknamed 'the huntress' due to her uncanny ability to usually get whatever she was looking for.

she lived with them for about five years before she met a group of people called 'the Dragon Riders' their leader had a Night fury, at first the group seemed hostile and she wanted nothing to do with them, but she kept running into them. eventually, the Dragon Riders asked her if she's like to join them, at first she was going to say 'no' because the Night fury named Toothless hated Elka but she was convinced to join when the dragon hunters came to Valdark looking for her and her dragons because she made them angry. she didn't really seem to fit in with them but eventually, she became more accustomed to the insane life they lived. she even moved to Berk after they abandoned Outpost island. she lived there for one year before she was forced to move yet AGAIN to an island called 'New Berk'. sadly she had to say goodbye to all of her dragons.

she was especially heartbroken because Hiccup and Toothless had only been with each other for six years but Kaya and Elka had been together since they were 5 years old, they are currently 20. in fact she had been with her dragons for longer than the riders were with theirs.

Kaya is very moody. she'd be angry one second and calm the other. she likes to 'help' people but most of the time her version of helping is jumping into something headfirst and not thinking about what could happen. she is so stubborn that mules move for her because she will stand there all day if they don't. she can be very hot-headed at times and is somewhat of an egomaniac. but she is loyal to the core if you tell her to wait she will wait until you say she can go. she really loves her dragons.

Kaya has great balance she can walk over a field of boulders without any issues while others struggle and fall. whenever people go hiking with her they often ask her to slow down, she usually ignores them.

Kaya is stronger than she looks, she can carry her ax with one hand and knife with the other,  she uses both for fighting.

Kaya is an amazing tracker and hunter. she's nicknamed the huntress because of this skill. she almost always finds who she's looking for but not without having one or two panic attacks first.

Kaya can see and hear very well, this is probably due to her ADHD but she doesn't know she has it and thinks this is how everyone sees the world.

Kaya can talk people into doing things for her because if they don't she will yell at them or annoy them into doing it. she makes friends pretty easily but she has just as many enemies.

Kaya has a loss of depth perception, she had been cut over the eye by Johann and that had rendered her completely blind in that eye. she got cut at age 18, so any time before that she could see just fine. however this just takes away her depth perception, she can still see extremely well.

Kaya has no common sense. she doesn't really think very well on her feet, usually when confronted by someone who's insulting her she tries to insult them back and doesn't usually succeed and ends up punching them instead, because words are hard, and punches are easy.

Kaya doesn't have the best people skills, she tries to be friendly but she has a hard time not being a control freak or overly mean. she can be very bossy and naturally assumes her role as the leader and others don't like that.

Kaya has issues with her temper. she has a very short fuse and likes to punch her way out of most conflicts. she isn't good at using her words and prefers to punch them. even though it gets her into more trouble she doesn't quite understand how to give them hell with her words and can't really make witty comebacks as they can so she prefers to fight.

Kaya has a very nice family compared to some. even though she hates her entire family they aren't that bad. her parents might be too overprotective. and her little brother is a titanic jack-wagon. he will jump at any chance he gets to annoy her and it works. she then punches him and he starts crying because he's weak. she gets into trouble a lot especially if she refuses to let her brother ride her dragons. there is a reason for this, the reason is Cal sucks at flying dragons. he often crashes Elka and Thunder into rocks and complains about how the dragons he doesn't crash are slow.

even with all of that she still loves her family (except for her brother, she hates him).

Kaya carries around with her a large iron ax, reinforced aluminum shield (mixed with a little iron), and steel hunting knife. the ax is her heaviest weapon and she had a 'getting used to this huge weapon' period when she'd fall over backward trying to weild it. she's since gotten used to her ax and is skilled at weilding it, it has green veins of deathgripper acid running through it allowing it to cut deeper and leave a more painful cut. although it's powerfull it's also obvious, she can't just pull it out when trying to be subtle. so she prefers to use her knife when she needs quick action and stealth.

Sheild. her sheild is a mix of aluminum and iron, making it light and strong. she uses her sheild to bash, defend, push back, and sometimes as a sled when she's bored and wants to sled. her sheild is super useful but it's a hassel to pull out. she has a metal sheath on her back where she usually stores her ax and sheild. it's pretty hard to get those out and she leaves herself open when reaching for them.

Knife. Kaya's knife is pure steel, it's somewhat light and very durable. its handle is made out of bone that's been sanded polished and cleaned. she really likes that knife and prefers useing it when she needs to act or think quickly. it's easyer to take out and put away as well as being ten times lighter then her sheild. but it's not very good for killing. if she has to act quickly she'll use it to distract the attacker and then pull her ax on them and finish the job. 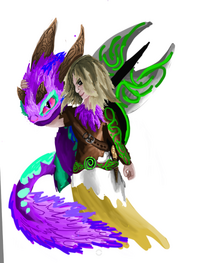 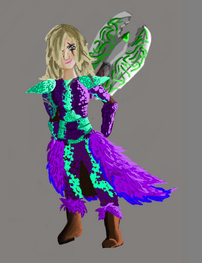