This OC character was created to accompany the "adoption" of a Feathered Fan Wing dragon. These dragons are the creation of ScarfyWings on the SOD Forum topic - "Scarfy's Adoptables".

The day was turning out to be bright and warm, warm being a relative term in the Barbaric Archipelago. Ketiley Margrkind, a girl just entering her teenage years, landed on Skertonn Island with her sister, Nauma. Skertonn was a small rocky bit of land inhabited by their cousin, Diggr, and his dragons. He was attempting to landscape the stony surface into something arable for his berry farm. The sisters were not here to harvest berries, however, but rather to harvest the abundant edible molluscs on the island's shores. Limpets and cockles, and winkles and clams, and whatever else might taste reasonable in a rich chowder.

The sisters decided to each go a different direction along the shore, Nauma to the West and Ketiley to the East, in order to maximize the area covered. After gathering her lunch ans clamming supplies, and a small bit of teasing of her older sister, Ketiley squelched off into the muddy sands.

The tide was out, so the cockles, clams, and maybe some mussels had burrowed under the sand. They left foot prints of sorts, though - lines and depressions in the sand and mud. Sometimes they only partially buried themselves. She lined the buckets with seaweed first. Then Ketiley pulled out a pronged hand rake and started to fork up the shellfish from under the sand.

Up on a hill, SmashSnout, Diggr's Spikeroller, appeared and let out a grumbly roar at the intrusion on his island. It was mostly for show, as he saw it was just a human relative after the shelled creatures and not his berries. He retreated from the cliff grumpily after Ketiley waved pleasantly at him.

The sea and shore birds cawed and screeched. Gulls flew low overhead, gawking at what Ketiley was about.  On the other side of a nearby outcrop, Oystercatchers flew tightly in a frenzied mass over the beach.

Ketiley slowly filled her bucket. She snagged a lone whelk closer to the rock outcrop and plopped it in her bucket. Limpets and winkles hunkered down on the wet rocks. Both were small and tenaciously attached to the stone surface. Ketiley pulled out a flat knife and pried the little snails and shallow cones of the limpets from the rocks. The black and white oystercatchers circled in the air above the beach, also making use of low tide to catch some molluscs of their own.

On the other side of the rock outcrop were dozens, possibly a hundred or more oystercatchers, all piping madly. It was a relatively small nesting colony, sitting in the pebbles and sparse sea grasses just above the high tide line. A large group of them were flying and diving tightly in a frenzied ball, loosing their minds over a rare treat or harrying an intruder. Many creatures like foxes found birds nesting on the ground a tasty food source and the fairly small birds looked like an easy catch. However, a large number of small birds could present a problem.

The birds' screaming was rather raking to Ketiley's ears. She huffed and planted her hands on her hips, though her show of irritation had little meaning to them. Black and white bodies blended together and bright red-orange pointy beaks flashed. Ketiley peered closer - was that a flash of blue, too? A larger shape on the ground amidst the tornado of oystercatchers? Foxes didn't have and blue on them. She moved closer and gasped. A rather hawk-like dragon fumbled slowly along the ground, utterly defeated by the throng of small birds. He had sought an easy meal of fowl, but instead earned their wrath, protecting themselves and their nests. 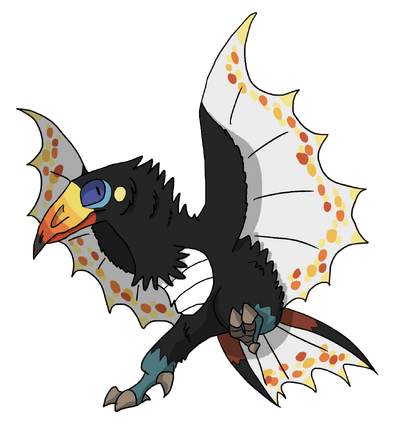 Ketiley was a bit spontaneous sometimes. She started waving her arms wildly about and charged the fighting flock. "Yahhhh!" A few dive-bombed her and grabbed at her hair, but mostly the startled birds spread out before her. She snatched up the dragon and ran away quickly to the other side of the rock outcrop. The bird-like dragon was also surprised and squeaked in terror and grabbed at Ketiley's arms, drawing blood, despite having a coat on. "Not helping!" Ketiley hissed through gritted teeth. Of course she knew the dragon probably thought he had become prey and acted out defensively. She plopped him down quickly and wrapped him up tightly in her tattered coat. "Now look, my coat is almost as tattered as you!" she chided. The beast was rather pitiful-looking. For a failed attempt at a feast, the dragon received gouges and cuts, scales ripped out and raw skin, punctured wing webbing, exhaustion, and a still empty belly. The Tattered dragon breathed heavily, thoroughly spent. For a moment, he sat still, bundled up in Ketiley's decidedly warm coat. The Viking girl rummaged around in her small rucksack and pulled out her lunch. There were some pickles and an apple, a bit of cheese, and two hard-boiled eggs. She unwrapped the latter and held them up. Even cooked, the small hungry dragon knew what eggs were, and he stared longingly at them.

"Are you going to peck at me again?" she asked, not really expecting an answer. She held one out and the dragon grabbed it up greedily with his beak-like mouth. He shifted it a bit, then swallowed it whole. Ketiley held out the other and it disappeared down his gullet promptly to join the other. Ketiley ate a pickle and put away the rest, flashing her empty hands at Tatters to show she had no more. The dragon looked at her hands with obvious disappointment.

"Now we ought to have Gothi look you over," Ketiley told Tatters matter-of-factly. "And on Berk there are more eggs. And there's the chickens. You might like chickens." That thought had her pause for a moment. She leaned in closer and whispered, "Please don't eat the chickens, at least, not love. You can eat then after they've finished stewing."

Ketiley scooped up the coat-wrapped dragon. He clacked his beak mouth and grumbled, but didn't bite her again. Somehow. by sheer strength, she was able to awkwardly carry both the dragon and the buckets back to the boat.

Just as she dropped the buckets into the boat, a big brown dragon appeared, following her sister. Nauma's bust seemed to have suspiciously enlarged from this morning, and grown a purple tail. They all looked at each other in surprised silence.

Finally Ketiley said, "Well. I only found a little one." Tatters squawked.

Nauma reached down her shirt and stroked the dragon sleeping there. "This one probably has a broken wing. This big guy is just following me. He's actually rather friendly," she patted the WebHead on his leg. "Maybe he'll follow us to Berk," she said hopefully.

The sisters loaded up their supplies and what shellfish they did manage to harvest and shoved the boat into the water. Tatters grumbled some more, but stayed put. He was liking feeling warm and the prospect of eggs. The sisters rowed back to Berk with two dragons aboard, and another following behind.

About the Feathered Fan Wing

"With their special fan-like wings and tail, Feathered Fan Wings are remarkable in the air. However they are very clumsy and awkward on land. That's why they spend most time flying and only landing on trees to rest. They hunt on flying birds and often catch small prey below. Fan Wings are small dragons and travel in group. They follow birds flying to south in winter (and eat them too!) and return in spring."

Note: For my personal preferences, I am considering the Feathered Fan Wing to have feather-like scales, as opposed to fully developed bird feathers. This is because, as yet, the HTTYD Franchise does not include feathered or furred dragons.

Oystercatchers are small gregarious black and white shore birds, found coastally worldwide. They do venture into Norway, but not much farther. They primarily eat molluscs and have evolved an orangey-red bill that can pry bivalves apart. They also eat assorted wormy creatures, fish, and crabs.