Leikny Hrindasnaer reluctantly took the shovel from her frowning mother's hands. Her father was gone on a slalom shipment, and her older brother was training at the Berk Academy. Several years ago, a young Hiccup of Berk with his tribe and their trained dragon, had saved her isolated Northern Tribe from the eruption of Mount Ymir. Since that turn of events, Chilblain had accepted dragons as allies and were learning to incorporate them into their lives. Many of the young folk therefore traveled to Berk to learn about dragons.

One little snag with the dragons though - many species were not particularly attracted to the cold climate of Chilblain. They preferred warmer climes like Berk. Hiccup Haddock had persuaded some Gronckles to stay those years back, due to their fondness of ore and volcanic rock. Other than them, though, there were some dragons as frozen as the town like Groncicles, Shivertooths, and one or two Wooly Howls.

Leikny buried herself under furs and wool, then waddled outside with the shovel. There had been a horrendous snowstorm the last two days, dumping ever more snow on the village. Fortunately for the Hrindasnaers, the wind blew to the back of their home. In the back the snow was stacked up higher than the roof, but up front, Leikny was thankful she could even open the door and step out. The previously shoveled pathways to the yak shed and out into town had filled back in, so it fell to Leikny to shovel it out. Like many a Viking lass, she was pretty hefty across her shoulders and back. Shoveling was not physically a problem, but it was so boring! It would be great right about now to have a dragon that breathed fire.

The snowstorm that had blown through, brought clear skies behind it. The weak winter sun shined wanly down. Leikny was spared the too-bright glint off of the surface of the icy snow, since she was in a snow 'trench' shoveling snow. Over time the pathways cut into the snow, forming higher and higher sides.

Leikny scooped up large piles and flung the crystal water over her shoulders to either side of her. She needed to carve out the path to the yaks first, to throw down hay from the loft, and carry unfrozen water, bucket by bucket, to and fro from the house. She worked for an unknown amount of time, pretty focused on her task. She let up though, to take a breather and wipe her brow. She looked behind her to see her progress, feeling confident she had gotten pretty far.

"What the Frigga?" Leikny exclaimed. Her mother would have pinched her ear to hear her use the Gods' names in vain. Behind her a couple yards back, it seemed the walkway had filled back up with snow. "Ugh," she muttered and traipsed back to the cave-in and flung the offending snow away. The snow should not have fallen back down onto the path. Leikny had literally been pushing snow all her life and knew how to pile it effectively. Perhaps she was going too fast, to get the chore over with? She would very much like to be eating warm stew right about now, or perhaps playing 'snowmaggedon' with the other youngsters.

Leikny stood up and bent backwards to stretch her back, then turned around again. "What??" she grumbled in surprise. More of the grainy snow had fallen back into the pathway where she had stopped shoveling before. She stomped back over and shoveled determinedly. She WILL make it to the yak barn, by Thor! She piled snow to her left and to her right. The trench sides became taller, as she entered an area of a huge drift, deposited from some previous storm. Fortunately this meant less snow had accumulated on the walkway, but unfortunately she had to heave it farther to clear it off. Leikny scooped up some snow and hoisted it forcefully to send it over her head. There was no wind to blow the stuff back in her face, yet snow flew back down anyway. And snow continued to shower down on her rapidly. Clearly someone was messing with her.

"HEY, Einvaldr, is that you? Don't you have your own shoveling to do?" Leikny yelled angrily. The snow stopped raining down, but no one answered.

"Coward," Leikny muttered and continued shovelling. Soon the snow started falling all over her again. She slammed the shovel into the ground and climbed out of the pathway trench.

"Hey Einvaldr, if you're gonna be a pest, at least do it right and use snowballs! Oh," Leikny stopped her rant abruptly. There was no bothersome Viking friend standing there, but a bluish dragon wagging her peach-spiked tail. There were a few other dragons of her species around the village - one on a roof, another sliding down an icy slope in the distance, and a few more here and there chewing on icicles and frozen icy snow. Evidently the snowstorm of the last two days had blown in more than just a heap of snow. 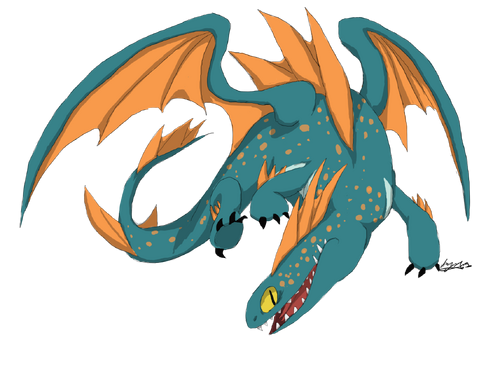 The dragon used her tail to fling snow at Leikny and then crouched down in front and waited. Leikny didn't know what to think of this. Certainly she did not seem aggressive, or dangerous at all. Unless you didn't have proper clothes on for the cold, that is. Getting no response from the human, the dragon swung her tail and pelted the girl with snow again, and waited. It was not fun if the other party did not fight back.

"Uhm ... I've, uhm, need to finish shoveling?" Leikny said awkwardly to the dragon. Did Berkians talk to their dragons? Did they understand? Leikny thought perhaps they understood some, at least. Her brother would certainly be able to tell her when he got back from training. What she did understand though, was that this dragon wanted to play. She also wanted to play, but was torn with duty to shovel the stupid pathway.

Leikny half-heartedly kicked some snow back at the dragon. "Aren't you supposed to be nervous around Vikings?" she asked. The dragon chirruped happily and flung snow back at her. Leikny didn't know what to do. She needed to finish her task. She wasn't one to shirk duty. Yet here was a dragon - she didn't know what species - wanting to play. Which she really wanted to do, too. Nor did she want to waste an opportunity to interact with a dragon. Her older brother might be jealous!

The dragon bent over and scooped up a bit of gritty snow in her mouth ans chewed absently, while Leikny fidgeted with internal conflict. All around, these ice-eating dragons were playing, or, eating ice. Eating ice and snow. Leikny's eyes widened as her brain latched on to an idea. What if ... the dragon ate the snow from the path? And it was fun?

Leikny smiled at the dragon and gestured for her to follow her into the pathway trench. She hoped the dragon understood. The dragon tilted her head and stepped over to the edge and peered down at Leikny. The Viking girl lobbed some snow at the dragon as enticement. The dragon slid into the trench. Being that these walkways were semi-permanent for much of the year, it was wide enough to accommodate this dragon. Leikny eagerly grabbed a handful of snow and shoved it in her mouth as demonstration, then shoveled some out of the way. The dragon gurgled questioningly. Leikny repeated the actions, then began shoveling really fast and looking back at the dragon in challenge. Who could move - or eat - the most snow in the shortest amount of time? Leikny already knew that answer, if the dragon would oblige. After a few moments more, the dragon jostled in next to her and started taking great mouthfuls of the fresh snow and gulping it down, while Leikny shoveled frantically beside her. A few times the dragon started chewing into the bank, but after noticing Leikny stayed along the channel, the dragon did, too.

Suddenly, the boring slow job was interesting. Before Leikny knew it, she and the dragon were sitting in front of the barn door. Leikny reached out and patted the dragon. Clearly, this dragon did not mind human interaction in the least. "Well, that's done. Maybe ice dragons can be useful. A fire-breather would just make everything soggy and muddy, I guess," Leikny said conversationally. The dragon chirped affirmative.

Leikny stepped into the barn to toss down hay to the yaks, while the dragon stuck her head in and smelled the different odors of dried grass, yak, and dung. The yaks shifted nervously. Unlike Berk's livestock, Chilblain's had not yet become fully accustomed to dragons. Like with dogs, they would get used to familiar individuals, but strange dogs were cause for alarm. They were much too similar to predators, like wolves. The dragon sensed this, and decided not to come in any further into the barn.

"Well, that part is done. Maybe we can have some stew now. Do you want some? I'm guessing you eat more than snow and ice. I wonder what mom will think of you?" Leikny chatted, scratching the dragon under the chin. "Maybe she'll know what species you are."

Leikny dashed down the now-cleared path back to her house, with the dragon bounding behind her. At the door she told the dragon, "Now I'll introduce you as, uhm, Snowmunch, okay?" Snowmunch nodded. Leikny knocked on the door, not wanting to burst in suddenly with a dragon. Her mother opened the door. "Mom! This is -" Leikny's jaw dropped as Snowmunch blew a mini blizzard in her mother's face ...

(The following is directly quoted from Chameishida's thread, "Introducing the Icecrusher - Customize Bases" on the SOD Forums. Please visit the thread link for more graphics about the Icecrusher!)

Earning its name from its love of ice chewing hobbies, Icecrusher will harvest ice to power up it blizzard breathing power because of that it can be found mostly around ice berg, while Icecrusher is also a good swimmer, it spent most of its time on land. it also has a great nevigation skill and like toothless and stormfly,  it can be one best buddy to its rider. Personality: Full of curiousity, playful and affectionate with friends, fierce in battle

Hidden Abilities: Icecrusher can control its body temparature, can change from its usual warm body to the ice cold body like the ice it ate. with that it can be the great assist to its rider in summer!

Icecrusher may not be the strongest or the fastest dragons around but they're shaped like a friend and would be a perfect companion for those who hate hot weather.