This OC character was made to accompany the fan-species dragon creation called the Gluespit. Gluespits were created by Chameishida of the "School of Dragons" Forum. More about the Gluespit can be seen in her thread, "Gluespit returns, now with titan form! - customizable bases"

Apparently every village had its young stooges. On Berk, the Dragon Academy had opened to all its allies so everyone could learn to train dragons and live peaceably with them. Chilblain, the frosty Northern mining town sent their eager youth as well. One such team - Chilblain Team 5 - they were only all to eager to be rid of, even if only for a little while.

Numbknuckles Kneeslapper, Dannimite the Droll, and Bearclod the Buffoon snickered at the back of the large gathering of students in the Training Arena.

Gobber the Belch stood at the front, swinging around a long shoe horn attachment on his missing hand. He had a fuzzy slipper on his one foot. "If I catch the lot that vandalized Boot Night, yer Team won't get ta get an egg at the Egg Ceremony!" he groused at the teens. The students collectively sighed in irritation, then looked puzzled.

Numbknuckles, the burly one with reddish brown hair and budding sideburns, was pleasantly surprised how easy the prank was. Hooligans apparently put their boots out on their porches at night to air them out. Everyone in Chilblain knew you didn't put boots out on the porch! You hung them from the windows of course, upside down. It could snow in them. So the team from Chilblain had taken it upon themselves to put ice in the toes of every single boot in town. They had to convince a few ice dragons to get it done, but it was worth it. Loki would be proud.

Bearclod elbowed Numbknuckles in the ribs and gestured toward Gobber. Now why would he actually want to listen?

"Now you may be wondering what the Egg Ceremony is. Well we just made it up," Gobber said matter-of-factly.

"Do we get to learn evasive maneuvers with a chicken egg fight?" Numbknuckles replied.

Gobber glared at him. "No, that would be a waste of food." he paused for a moment in thought. "But maybe we could try that with dragon droppings or yak dung!" he said a bit too brightly.

The students grimaced, except Dannimite. Numbknuckles elbowed him. He shrugged. "What? Yak pies freeze solid in the winter. Like throwing snowballs, only better."

"As I was saying, the Dragon Riders just raided an Auction with alotta eggs, dragon eggs, that is. Big ones, wee ones, round ones, spiky ones, swirly ones, stripy ones, ..."

Dragon eggs. Neither Numbknuckles, nor Dannimite, or Bearclod had their very own dragon yet. Most of the students here, the newer ones, didn't. This was a great opportunity. Numbknuckles bit his lip to keep from chuckling or saying something that might be interpreted as foolishness.

"... blue ones, rocky ones, ones that look like they're really hard but might be a little soft in the center ..."

A few students politely cleared their throats, to break Gobber out of his tangent describing eggs. Numbknuckles bit his lip harder.

"Oh, right. So each group will get ta pick their very own egg. Now, once you get the egg, there will be a grand hatching right here. So start studying your Dragon Manual ..." Numbknuckles zoned right out at the mention of "studying". His copy of the Manual was mostly scribbly pictures of dragons with scowly faces than with any kind of written notes in it.

For the rest of the day, the three tried their best to not play any pranks, joke, or gad about.

The students all gathered the next day in the Arena again. At the front was Gobber, as well as several tables with crates and crates of a wide assortment of dragon eggs, nearly as varied as Gobber had said. A few of the older students, ones who already had their very own dragons, stood at the the tables. The idea was that one person from each Team would step forward when called. Each of the student presenters would pull out an egg and show it, then the team representative would select one of the offered eggs. The team needed to have an idea in mind of what they wanted or needed, and also be able to identify dragon eggs.

"Randomness!" Dannimite pumped his fist in the air, out of nowhere.

NumbKnuckles nodded in agreement. Surprises were the best.

"A dragon that breathes fire! Then we could set fire to things!" Bearclod said excitedly.

"But most dragons breathe fire. Besides, we are good at setting fires on our own," NumbKnuckles pointed out. Indeed the boys were extremely proficient at starting fires, even in their cold snowy town, where fire-starting was quite tricky. "But fire-breathing is nice, though," he amended, suddenly thinking about the even bigger fires they could start.

Gobber started calling out Teams. "Berk Team 15!" This was the first, and a red-haired boy tentatively stepped forward. He looked over the eggs the older student held out and finally settled on a speckled one.

"Chilblain Team 5!" Numbknuckles pushed through the crowd. "We're the Chil-blames!" he corrected Gobber. The old Viking scowled at him. Numbknuckles, made a flourishing bow, "Respectfully, sir," he amended on as best behavior as he could muster.

Gobber rolled his eyes. "Team Chil-blame! Now hurry up before I blame you for holdin' us up!"

Numbknuckles stepped up and examined the proffered eggs. They all had their potential. The green pointy-ended one was interesting. Then there was one dark red that the guy holding had to shift back and forth like it was hot. There was one with rainbow speckles all over it. Another oval one that looked like stone. A yellow one with green splotches.

He held out his pointer finger at each one "Eenie, Meenie, Mienie, Mo. Catch a Nadder by his toe. If he fires, let ..."

"PICK ONE BEFORE I SET THE NADDERS ON YA TO SEE WHAT HAPPENS WHEN YA PULL THEIR TOES!!" Gobber bellowed.

Numbknuckles grabbed up the stony-looking one and scuttled back to his teammates.

That evening once again, the same students were gathered together in the Arena. This time a large pile of wood and other combustibles were stacked in the center. The students ringed all the way round. Deep troughs and barrels were placed around the wall. Numbknuckles, Dannimite, and Bearclod stood up close to the fire with their textured grey egg. Every team seemed to have some kind of armor on or a shield of some kind. The Chil-blames just had their usual garments on and horned helmets. A boy with a battered chest plate on next to them looked them over, surprised, then chuckled and walked away.

Gobber moved to the front of the wood pile. "Now remember to write down everything in yer journals. If ya can't write, draw pictures. A picture tells a thousand words, ya know. I draw myself. We'll be having weekly reports on how yer raising yer babies."

Numbknuckles groaned. He wasn't even sure where his journal was at the moment. It might have been what he used to prop one of his bedposts up with, since one of the floorboards was a little uneven.

The student started nestling their eggs amongst the wood bits. Numbknuckles followed suit, but stayed near by, while the other students backed away. Far away. A yellow Monstrous Nightmare hovering above the arena blew a gout of fire onto the wood and set it alight. The tinder was dry, so it caught quickly. Flames engulfed the pile and the eggs within.

"If we knew there was going to be a bonfire, I would've snuck some ale into the arena," Numbknuckles commented. The students were strangely hushed for what otherwise had the makings of a party.

Suddenly from within the fire was a pop, followed by a succession of bangs and booms. A piece of shell and egg goo flew out of the fire like a projectile and hit Dannimite squarely in the face. The other two immediately started laughing at him.

Both were promptly silenced as shell smacked into them, too. Dannimite wiped his face off and laughed back.

Not all the eggs burst violently open, but enough for egg bits to be raining down on the arena. This was followed by mewls and squeals and growls as baby dragons of all kinds started emerging from the flames. Chilblain Team 5's own stony egg ruptured with a crackle and pop, revealing an angular little brown beast with yellow eyes. He had pointy wings and a pointy tail and his cheeks were smooshed out to the sides like someone had pinched his cheeks and stretched them out. The little dragon tilted his arrow head to regard Numbknuckles. He chirped, then spat at the boy. A tiny loogie splatted on the top of his helmet and solidified. 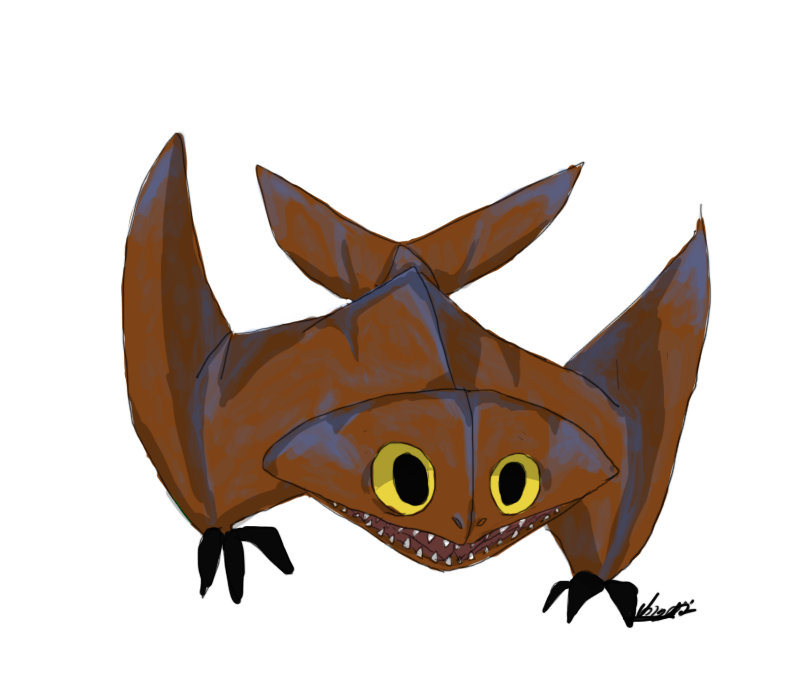 "Oooo, a Gluespit!" Numbknuckles admired and picked the baby up. The baby almost seems to smile and chirped again, followed by a stream of clicks and clacks.

"Maybe he's hungry. There's fish over there," Bearclod pointed to a basket that other students were plundering to feed hungry dragons. "I thought they were snacks for us."

Numbknuckles stroked the baby under the chin. Finally the little dragon stopped on one note, clicking his tongue with it over and over. Suddenly Numbknuckles head was rattled around as the spitwad on his helmet suddenly exploded. "That was fun," he commented as the baby dragon became two in his addled sight, but just for a moment.

(The following is directly quoted from Chameishida's thread, "Gluespit returns, now with titan form! - customizable bases" on the SOD Forums. Please visit the thread link for more graphics about the Gluespit!)

The Swallow bird-like dragons that can shot an explodable saliva

Gluespits can fly for a really long time and fast. Their hammer-like heads are really hard but can also flop back to gain speed when flying. Like their name has suggested, They shots a sticky saliva that immediately solidify when contact and explode when the gluepits make a vibrate noise which made their attack even more deadly.

Hidden Abilities: Gluespits also use their Saliva to create a web like nest, however, that is also prevent the dragons to use their vibrate noise around the area, their legs are also too weak that they can't fly once they lands on the ground but their claws can help them climb up a really high place and regain their ability in flight