This story was written to accompany a Shivertooth art piece drawn by WitcherForever on the SOD Forums. The artwork was a prize for a Hideout Competition (in the game, School of Dragons) put on by forum members on the thread, "Viking Contest - Show off your Dragon's Edge Hideout!".

Please read Bulljorn Burlyboot's story first. This story runs parallel to the events in that in Bulljorn's story. 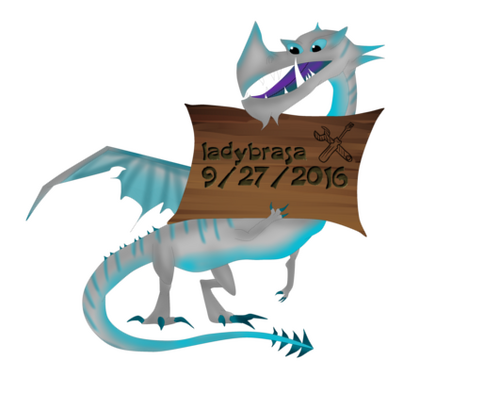 Scrampr Skrimpskull stood with his friends, Bulljorn and Goongory, at Berk's Dragon Academy, along with several other groups of boys and girls. Gobber the Belch was extolling on the details of the Viking-in-Training's next challenge. "Now some of ye don't have dragons yet, so one will be provided," Gobber explained. "Remember, you are needed to learn how to survive on yer own and with your dragon. Ya need to get along," Gobber looked pointedly at Scampr's group. It was no secret those boys were a bit belligerent.

All three boys were big and brutish, but Scampr was the smallest, if he could be called that. His assets went almost exclusively to the physical; he would make an excellent henchman someday.

A few of Berk's resident dragons were in attendance. Gobber went to each group of students and assigned a dragon if needed, and a location for their survival training. As Gobber reached them, a grey and blue Shivertooth stepped forward.

Bulljorn crossed his arms grumpily. "Whatever," he muttered. "He's not my dragon."

Bulljorn shrugged. Goongory didn't even seem to be paying attention at all to any of the proceedings.

"Now you boys will be going to the Arctic Wastes. This boy'll know the way," Gobber informed them, patting the Shivertooth.

And so off to the Winterlands the boys went on the Shivertooth, loaded down with supplies and a little green mail Terrible Terror.

Upon arrival, the Shivertooth dumped the boys in the snow and made himself a nice burrow in the snow, and with baggage still strapped on, fell asleep.

Bulljorn ranted at the dragon. "Hey, What are you doing, you lazy dragon?"

"Well, he did just fly us and our stuff for quite a ways," Scampr murmured under his breath, not loud enough for anyone to hear. Bulljorn was in a foul mood, and he didn't feel like fighting him. Then louder he said, "So, uh, now what?"

After bickering amongst themselves and Bulljorn taking the lead, the boys had a serviceable hovel crafted from snow, thanks to the Shivertooth's example.

While the Shivertooth slept, the boys foraged for food. They even saw a dominance fight between rival Hopeless Deathtrails, leaving the young male a loser and injured. Scampr tried to find the species in his own Book of Dragons, but his penmanship was so poor, even he had problems reading it. He felt a little bad for the dragon, but as Bulljorn pointed out: "Survival of the Fittest."

The next day the boys needed to scout for food again. They needed to go to the sea, and for that they needed the Shivertooth to fly them there. Walking would take all day. Neither Goongory or Bulljorn seemed particularly interested in rousting the dragon, so Scampr approached him. "Take us to the coast, now!" he puffed up and ordered the dragon authoritatively. The Shivertooth blew a puff of snow at him, then grunted segmentally as if laughing at his own joke.

Scampr frowned and drew himself up again. The Shivertooth already started ignoring him. Scampr felt his temperature rising, getting angry. This dragon was not listening!

The Shivertooth was a sensible creature, and felt the boy's ire rising. So he misted the boy with some frost and sat down next to him and waited. Scampr sputtered, not sure what to think - and that was hard to do - his anger quenched. "Shivertooth, we should go fishing. We are hungry. You might be, too. Can you take us to the sea?" Scampr explained. As an afterthought: "Please." The Shivertooth sighed and crouched lower to the ground so the boys could mount, and off to the sea they went for the day, fishing.

Back at camp that evening, the Shivertooth made a point of burying some fish he has brought with him in the snow, right in front of Scampr. They could keep fish this way at these frozen temperatures for some time. The poor mammal needed some guidance.

"Oh, Shivers, why are you burying the fish? Why not eat them?" Scampr asked. Dragons were still rather mysterious to him.

Goongory spoke up. "Why are you talking to the dragon? Think he's got more brains than you?"

Bulljorn piped up next. "He's got more brains than you, Goongory. Fish won't rot if you keep them in ice. He's saving it for later."

Scampr was also the only one to tend to the Shivertooth, as the other two boys seemed not to give the dragon much though. He removed the saddles and rubbed him down with snow and rabbit fur. For all Bulljorn was militant about soldiering and honor and strategy, he forgot about some basic things like caring for your tools and weapons. And this transportation breathed. Scampr also found it relaxing, rubbing down the dragon. And Shivers liked it, too.

Well into the boys' time in the Arctic Wilderness, that Deathtrail stomped into camp. Bulljorn was standing next to him though, puffed up like a proud puffin. "Oh. I wondered how he didn't starve," Scampr commented. Evidently Bulljorn had been playing nursemaid all along.

Scampr heard Shivers grunting in his snow lair and stood beside the opening. Deathtrails could be pretty aggressive, and Scampr fidgeted a little with worry. Shivers emerged and predictably the Deathtrail roared a challenge. Shivers was not impressed with the young male dragon. Or the young male humans for that matter. Except the relatively smaller one at his side. Shivers was the only one who could blast frozen water at that one, and besides, that boy had a lot to learn and seemed receptive enough.

Shivers blasted the Deathtrail and toppled him over. The young bull hopped up, embarrassed. Shivers dug up some fish, letting Scampr take one to toss to Bulljorn and his dragon. "That was kind of cool," Scampr whispered to Shivers, unaware he had just made a small joke. _Cool_. Then Scampr stood up with authority. "Well, I guess that makes Shivers the Alpha of this group," he pronounced.

Bulljorn the pull of rank. "Shivers? Really? You couldn't think of anything else?"