How to Train Your Dragon Fanon Wiki
Register
Don't have an account?
Sign In
Advertisement
in: Free to Use, Dragon species, Fury Dragon species

“Steer clear of Sea Furies, they're not known for their kindness to humans and tolerance of ships. If you do run into a pack, ready your nets and cannons, they'll put up a fight.”

— Sailor warning others of Sea Furies

A relative to the Night Fury and Light Fury, a Sea Fury is a class hybrid being both a Strike class dragon and Tidal Class. While shorter and smaller than other furies they have a much smaller wing-span comparatively. They can be any shade light of blue or bluish-green and have dark blue tips on their "ears". The tips are a very handy way to tell male Sea Furies from female ones. A male often has less blue on his ears than a female. They have dark blue outlines on their leg ridges, spinal ridges, wings, and tail fins. They also have webbed claws. Most, if not all, Sea Furies have purple eyes. There are two breeds of Sea Furies. Tropical Sea Furies prefer the warmer climate found in the equatorial areas. They are closer to a teal or sky blue. Arctic/Northern Sea Furies live in the northern regions of the world. They are generally have a bit of a stronger build and tend to be mid-tone blues to violets.

Green Sea Furies, while they do exist, are incredibly rare as their coloring is caused by a gene mutation.

Sea Furies live in oceans all around the world but, particularly in the Atlantic Ocean. The prefer more coastal areas of the ocean as opposed to the deeper areas. Tropical Sea Furies are very abundant in the equatorial regions of the sea. The farthest north they'll go is around North Carolina and the farthest south they'll go is the bottom of Brazil. Northern Sea Furies live from the southern border of Canada and northward, although few live deep in the arctic circle.

Sea Furies eat a variety of different fish and things found in the sea. Some have been known to eat seaweed and most eat sea grasses along with larger fish. Tropical Sea Furies also have a bit of tropical fruits in their diet and will sometimes eat a sea turtle or shark. Northern Sea Furies, in addition to fish and hardy seaweeds, eat seals and will sometimes hunt down a polar bear as a pack.

Like all Furies, Sea Furies have a plasma blast. A Sea Fury's plasma blast is a bright teal color and is quite powerful for a smaller dragon.

All Sea Furies, due to living in oceans, have very good cold tolerance and will sometimes purposefully go to the arctic during hot summer months for the cold. The one exception to this migration are the Tropical Sea Furies. They simply get wet and then lie in the sunlight waiting for the breeze.

All Sea Furies can swim well and can hold their breath for up to two and a half hours.

Sea Furies have very tight herds. This protects them from potential predators (titan wing Scauldrons, humans, and sharks). It also keeps families together. There is one head pair, the alphas of the herd, who decide when it is time to migrate. Few Sea Furies are outcasted. The largest herd ever found was about 200 individuals in number.

Northern Sea Furies are very sensitive to heat and can overheat quickly, because of this they tend to stay near water for a quick cool off.

Being sea creatures, Sea Furies have a very hard time being away from water. The average Sea Fury drinks around 8 gallons of water a day and without that water, will die quickly.

Loss of a Tail Fin

Like all Furies, if a Sea Fury loses one of their tail fins they will be unable to fly and swimming will become very hard.

Like all dragons, Sea Furies have a fear of eels. If an area has too many eels they will evacuate the area to move to an eel free zone. They also have a very high intolerance to eels and can die from eating one.

Sea Furies with green scales have a rare gene defect. Aside from having green scales, they tend to have smaller tail fins and wings and eyes that are bluer. Many Sea Furies that have the mutation make it to their adult years, despite not being outcasted. The green scales affect their camouflage abilities against the blue ocean and their smaller tail fins make it harder to move through the water, resulting in predators taking advantage of them, usually titan wing Scauldrons.

Unlike most other Furies, Sea Furies are relatively slow flyers. This is because they are better suited to underwater life. Because of this, they make easy targets for Dragon Hunters, who sell their skins and claws.

Sea Furies will find shallow, warm water to lay their eggs in. When the eggs hatch, after a 2 month incubating period, the baby Sea Furies are ready to eat, play, and swim. It takes them 48 hours before they're ready to fly, though.

After 2 years, Sea Furies are considered a "child". At this point, they have developed strong family and herd bonds. They may have a few friends at this point. At this age, they start coming on hunting trips.

When they reach 10 years of age they are ready to hunt on their own. While some Sea Furies at this age go out on their own some decide to stay back as they are vulnerable to large sharks and other sea dragons. When Sea Furies are 15 they become a Broadwing. At this age, they reach their adult size and are able to mate and go on solo hunts. They have a shot limit of 3 at this time.

When fully grown, they are able to go deeper into the ocean and reach depths of up to 1,000 feet. They also have a complete shot limit. Their Titan Wing look is incredible. Like Night Furies, their spinal ridge glows but, unlike Night Furies, other patterns appear. Each Fury's pattern is different and no two are alike.

Training Sea Furies is hard but, not impossible. The best way to train a Sea Fury is to find a Hatchling or Short Wing. These dragons do not think badly of humans yet and you can train them as you would any other dragon. If you are attempting to train an adult, figure out what breed it is first.

If it is a Tropical Sea Fury, approach slowly with lots of food. Rub their scales down with a soft brush to remove sand or salt stuck in between them and speak gently to the dragon. Keep this up for about a month and it will eventually let you ride on it's back.

Northern Sea Furies are harder to train. The safest way to train them is to show yourself slowly. Start by observing them from afar. Learn their personality and what they like, don't like, and which dragons they enjoy being around. Slowly come closer to the dragon. This might take several weeks but, it is worth it. Then, start leaving gifts (such as foods, or other things you find them to like) and a small bit of fabric from your home. This will get them accustomed to your scent. When you've done this for about a week, you should be able to approach them. Do so slowly with no sudden movements. Leave any weapons behind and have both your hands showing. Now you should be able to bond with them.

Hatchlings and Shortwings are far easier to train and can be fully trained in about 2 weeks, given proper care, food, treatment, and love. 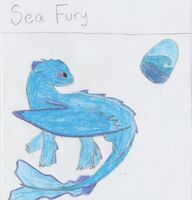 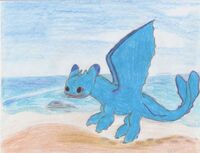 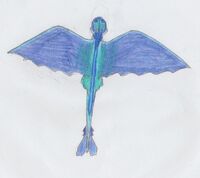 The Original Design for Sea Furies

The Original Design for Sea Furies

Hybrids are free to make. No permission is needed, just credit the Sea Fury species to Ember Akasie.

Sea Flames are the powerful and stealthy hybrid of the Sea Fury and the Deep Flame. They have very sharp claws and teeth but, only attack if they are provoked.

Soul-Furies have no distaste for the water, actively swimming often frequently. It then could occur they run into Sea Furies - along with the possibility of a hybrid. Sea-Souls are semi-nocturnal, with dark blue stripes and turquoise colouration. They have dark blue 'fins' on the back of their legs and swim quite easily. They are small compared to a Night Fury as both parents are smaller than a Night Fury. Like Sea Furies, gender can be told by ear-tips; males have black ear-tips and females have light blue ones. The Soul-Fury glow is visibly dimmer (Unless in the dark) and they still have rather ghostly looking eyes (Pupils are usually purple). They plasma blast is white, purple and blue in colour.

A Sea Flame By Tsunamiwave2010

Sakari is a Sea-Light (Sea Fury x Light Fury hybrid). She is in Team Soteria and is the future mate of Apollo.

Aukai is a female Sea Fury.

• Sea Furies have been discovered in deep freshwater lakes. While most Sea Furies prefer saltwater, these seemed to prefer freshwater.

• There is a herd of green Sea Furies living in the Caribbean sea.