This is an OC character created to adopt a fan-species called the Shadowing Wyvern, created and offered by Spy Girl on the SOD Forums. The thread is "Shadowing Wyvern adoptable". Storsik was successful!

Fishing for Food, and Finding Friends

With their longship safely moored in the large river, Storsik and Blasik Fiskrspordr moved off in smaller crafts in opposite directions down tributaries to the main river. The identical twin Berkians were checking their fish baskets, in a somewhat secret land that was little frequented. They were admired for their excellent freshwater fish they brought back home. The fish were plentiful here, and each brother claimed a side stream to fish, then would engage in loud brotherly arguments about who got the best catch and whose wife could prepare it better.

Storsik rowed to the left, with long powerful strokes against the current. Like most Men of Berk, or most Vikings for that matter, he had well muscled arms and chest, and a strong back. Thick trunks of legs supported the mass, though they were a bit short. His hair was dark brown and his beard tied into multiple braids to keep it somewhat in check. It was not pleasant finding fish bits in his hair days later. Blasik had a little easier time of it - he kept his chin shaves and a mustache in long barbels, similar to Gobber the Belch. It was also a handy way of telling them apart at a moment's notice.

The smaller river narrowed some more, and Storsik arrived in the area where his first fish baskets were submerged. The baskets were oblong with a funneled opening facing upstream. It was baited in the interior with all manner of things - bugs, bits of other fish, meat bones, fruit, and anything else that might entice a fish. The fish would enter in after the bait, but have a rather difficult time swimming back out through the narrow opening. He hauled the baskets in one after another, full of shad, bream, chub, burbot, perch, trout, greylings, some salmon, whitefish, and of course, eels.

Toward the end of his route at a pooled area where the last basket was placed, Storsik came across a young Zippleback mother and her two babies. She seemed to be showing them what fish are and how to hunt them. Storsik stopped rowing and let the boat drift, staying silent and moving slowly. The mother's right head puffed a bit of smoke, and the left hissed and sparked warningly. She backed up away from the water's edge, and corralled her babies splashing in the shallows. His presence made her nervous, of course. The babies squealed questioningly, bu obliged their mother and moved behind her. Better to just leave than see if this human was friend or foe. But with her babes safe behind her, both heads kept glancing worriedly at the water, even making soft calls and reaching motions. Motioning right where Storsik's last fish basket was.

"Oi, mother, are you hungry?" Storsik asked quietly. He had plenty fish to spare, especially to placate a potentially explosive wild dragon. He floated a little closer and pulled out four lovely trout from a basket. As best he could, he heaved them at the shore near the Zipplebacks. The smoking head caught one mid-air, and the sparking head gobbled down another as soon as it touched the ground. Each head picked up the remaining two fish. She seemed satisfied with this exchange, and ushered her babies farther away from the perhaps not-so-threatening human.

Storsik rowed over to the basket and heaved it out of the water. "Oi! Oi! What's this?" he exclaimed loudly. As soon as the basket touched down on the deck, he cracked open the basket. What manner of fish was this? It wasn't a fish at all. A gasping baby dragon rolled out amongst the fish. Storsik supposed the little thing was nearly drowned. It was small and very ribby. Probably swam into the basket after the fish in hunger and couldn't get back out. Or perhaps it was weighted down by that colossal tail mace. Storsik laid him - it was a male - out on his belly and stretched out the two frilled heads. Then he thumped firmly on his sides. Dragons were naturally excellent swimmers, but had to come up for air eventually. The little dragon sputtered and coughed. Some water spat out, followed by a few brilliant blue sparks. He gurgled piteously. Storsik pulled out some furs he had for himself to wear and wrapped the dragon up so it wouldn't catch cold. 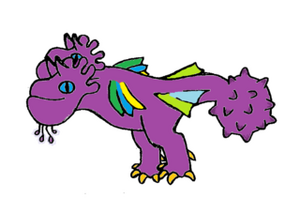 He pulled out some small minnows and dace that had gotten caught amongst the other fish. He also pulled out his lunch which, somewhat ironically, was cheese and sea-salted yak. He offered the small fish and bits of his food to the dragon. Despite his debilitated state, he greedily snapped it up with both heads. His tummy began to bulge, so Storsik stopped feeding him. The baby dragon looked longingly at the fish basket with all four eyes for a moment, then burrowed into the furred garment and went to sleep.

"Eh? Okay little not-fish. But what now?" Storsik asked of the baby. The dragon did not respond. He wasn't sure his wife would be entirely pleased. He wasn't even sure what species this was. The dragon's necks were short, had knobby head frills, a huge mace of a tail, and tiny wings that reminded Storsik of his wife's brightly colored quilting swatches. Would he even be able to fly? Though he had two heads, it wasn't a Zippleback. He supposed the little orphan had tagged along with the Zippleback family. The mother probably had some caring instinct for him, but ultimately her attentions were rightfully dominated by her own flesh and blood offspring.

Storsik sighed. He pulled the dragon-containing bundle closer to his side and picked up the oars to start rowing back to the longship. Blasik would surely have something to say about the little scaly not-fish he pulled up. But Storsik ought to win the argument of who caught the most unusual things for sure.

"Come on Not-Fish. KnotFish?" Storsik nodded to himself. Knotfish. "Let's show off to my brother what good fishermen we are," he said to the fur bundle. The bundle leaned closer and chirped in contentment.

Knotfish, like most dragons, is loyal to the fisherman Storsik who saved him as a baby. His original origins are unknown. Because he started off early in life being famished, his is a bit of a food hog, and can get almost aggressive if another dragon comes to close to his food. Sometimes he over-eats. It took a long time, but his wings did grow out enough to fly. He accompanies Storsik on all his fishing expeditions, guarding catches and helping with the hauling. On the occasions that the fishermen brothers get lost at sea, Knotfish can easily direct them home. His mace tail even serves as a decent boat's anchor. Unlike Zippleback heads, Knotfish's two heads get along well, perhaps because they are closer together than a Zippleback's. The two heads rarely argue. However, if he is particularly hungry, the two heads will occasionally snap and growl at each other. Despite his bulky size, Knotfish is rather active and well muscled. Storsik built a small catapult onboard his longship, just so he can launch fish at a great distance for Knotfish to run or fly after!

Storsik's identical twin brother has a page of his own with a dragon meeting story at: http://httydfanon.wikia.com/wiki/Blasik_Fiskrspordr

The name Storsik is the Swedish name of a fish in the Salmon Family found only in Sweden. There is no English name equivalent. The scientific name is: Coregonus maxillaris. The brothers' last name is a combination of Norse words "Fiskr" for fish and "Spordr" for tail.

(as written by SpyGirl, the creator, on the SOD Forum thread: "Shadowing Wyvern Adoptables".)

The Shadowing Wyvern is a tracker class dragon that is very rare and can be very aggressive when it is defending something but is otherwise considered gentle. It has two heads which makes it able to track twice as good, and a tail that can be used as a weapon or a tool. They are usually colorful but have been found in a majority of colors. On its head it has two horn great for defense. Also on its chin it has tendrils similar to the shockjaw. Their blast is a beautiful sky blue, that is able to melt through solid rock very fast. It walks on two feet. As a hatchling it has very small wings but they grow as an adult they become actually quite big.

Retrieved from "https://httydfanon.fandom.com/wiki/Storsik_Fiskrspordr?oldid=35948"
Community content is available under CC-BY-SA unless otherwise noted.