Some time ago I decided to write a spooky story and as I was big into the Dragons: TV series at the time it ended up being about a Lycanwing. And I thought now it was Halloween I would share it with the people here. Note: I am using this wiki as the main one has a rule against fanfiction. I entirely understand the need for moderation so if this is not the right place do not hesitate to let me know. 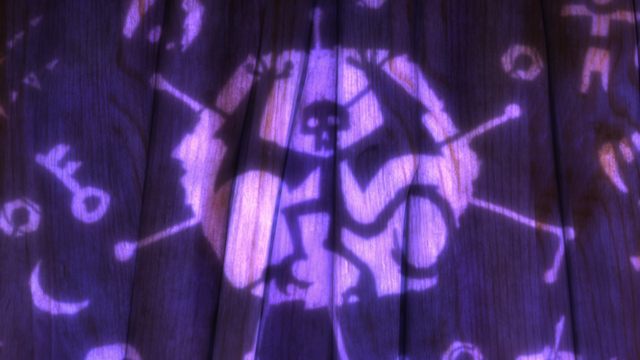 We sat watching the campfire. This was mainly due to the fact that the sun had now long set rendering the fire the only thing there was to view but in part because it gave us a sense of community. This was in some senses a shame; this beach was such a wonderful space in the daytime.

However, this did give us an opportunity to talk. And talk we did. We had a lot of catching up to do as my mail had been chasing my dad’s brother ever since he set sail and most of it was still chasing him. He, on the other hand, had a lot to say about living on a boat for a year, most of it involving the problems and difficulties.

The fire dwindled and I got tasked with picking up some more firewood from the forest behind. I didn’t like the forest at night. It was different than in the day. It was dark, full and generated some of the world’s creepiest sounds.

The hairs stood on end, my ears felt as though they were twitching and if I had possessed hackles they would now be standing as tall and firm as they trees around me.

Never-the-less, I didn’t think it would actually be dangerous. Not then. I mean that was before I had heard of it. But I ran into problems very quickly. I tripped over a root, walked into a thorn bush and got hit by a low hanging tree branch, all adding to my suspicion. Then I began to hear it.

At first, it sounded like the low moan of the wind through the trees but different. Then it raised its pitch to a terrifying shriek. Then the sound disappeared altogether. ‘What was that?’ I wondered, ‘and how did it come to be here in this forest at this hour?’ Slowly at first, I began to back away from where I thought the sound had come.

Then I dropped my logs and ran. Sprinting over fallen trees and dead branches I raced back in the direction I thought would lead me to the beach, then I began to hear it pursuing me. It must have been faster because I could hear it gaining on me. I tripped. I lay helpless on the ground without the energy to get up, waiting for it to eat me.

But it didn’t. At first, my ears were too full of the rushing of blood for me to hear a sound, but gradually my panic subsided, and my strength recovered, and I began to pick myself up. That’s when I began to hear its circling.

It was pitch black, sleek and dangerous. Red eyes were mounted on the skull-like head of its vaguely humanoid form, but it could instantly be seen not to be a human. A tail swished menacingly behind it, it paced the ground with two tri-clawed feet and two wings jutted from its body where its arms should be, yet they were far too small to sustain the thing in flight.

Instantly my panic returned, and I fell back to the floor helpless. I have no idea how long I spent there but it seemed like an eternity. The thing would circle around me, getting increasingly close and then stop, as if wondering what it was doing, and then back away a bit. I have no idea how many times it did this before pouncing.

But pounce it did in the end. Strangely it didn’t go in for the kill. No, just took a chunk out of my arm and left. I have no idea what was going on. But as it ran I decided I wanted to, and so I chased it.

I found it cowering in a cave next to a half-eaten fish, red eyes flashing in every direction attempting to assess how it would escape. “Escape what?” I wondered aloud, “not me surely.” “Of course, I’m not trying to escape you,” the thing spoke with a low growl. “I am trying to escape me.”

It transpired that he had also once gone exploring in these woods at night, and had been bitten, just like me. He had suddenly become sensitive to light and was forced to hide in a cave by day. He had found a puddle in the cave which quenched his sudden thirst and it was from this came the first raw fish he ate. His arms became itchy and he flinched away from touch. Then, he had started to become scaly, wings had sprouted from his body and his eyes had transformed into red searchlights.

He spoke to the person who bit him, who told him the same story as he had just told me, as I have just told you. “So, the bite is infectious?” I asked, beginning to understand my situation. He nodded. “The bite you just gave me?” A pause. Then he nodded.

I am the administrator of The Draconic Alliance which is to my knowledge the largest (and only) community of wikis dedicated to dragons and which I hope this wiki will someday be part of.

Go to these sites to discover the secrets of Dragonkind!

Want your community included? See how!

Retrieved from "https://httydfanon.fandom.com/wiki/User_blog:Swordsofwrathadmin/The_Lycanwing?oldid=19535"
Community content is available under CC-BY-SA unless otherwise noted.